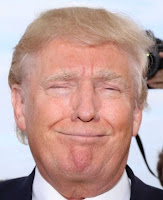 Something that people on the political left don't seem to understand about the nature of Donald Trump's support is that no amount of insults and name calling is going to dissuade his supporters. There's nothing anyone can say about Trump that's going to make him look any crazier than the things coming out of his own mouth, and clearly, his supporters don't care.

You can say or imply that his supporters are racists, fascists, homophobes, xenophobes, ignoramuses or whatever you like, but that's not going to work either. The ones who are don't care what you call them, and the majority who aren't are only persuaded further about how dishonest and sleazy the left has become, and that a tectonic shift in the system is needed.

That these things are problems is something that the political left and even the Republican establishment have consistently either failed to acknowledge are problems, or failed to deal with in any substantive way, other than to make them worse.

Hillary Clinton can promise change all she likes, but she's been firmly nestled in and benefitted from the system that caused all these problems for a quarter of a century, so it's hard to believe her.

Then along comes someone like Donald Trump, a political outsider, who promises to blow up the political correctness and the entrenched establishment. Despite all his many obvious flaws, just that is enough to make him bulletproof to many millions of Americans.

So if leftists really want to know why Donald Trump stands a very good chance of becoming the next President of the United States, they should take a look in the mirror. Because it's the political left who caused it.
Posted by Richard K at 8:46 PM