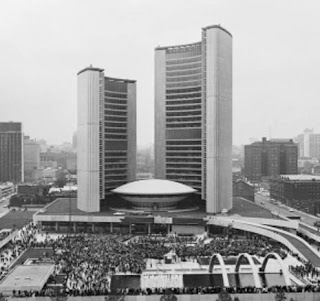 For good reason, the public tends to be cynical about politicians. There are a handful of decent ones who are honest and genuinely work to make the country better. Marc Garneau and Jason Kenney come to mind in that regard. But most are either corrupt, egotistical, dishonest, or possess some combination of those base characteristics. Nowhere is that more the case than at the municipal level.

In the last month or so, Torontonians have learned a lot about how worse than useless their politicians are.

In June, in response to a mass shooting in which 49 gay clubgoers were murdered by a terrorist who had pledged allegiance to the Islamic State. So what the response of many of Toronto's politicians? To condemn 'Islamophobia' rather than to condemn the ideology the inspired the massacre of innocent Floridians.

That response was only slightly less imbecilic than that of the Toronto chapter of the Black Lives Matter group. In what sounds like a parody of what would happen if a Gender and Equity Studies class were conducted by patients in a psychiatric ward, Janaya Khan, the most prominent leader of that group, blamed a mass murder of gays committed by a Muslim of Afghan background in the name of Islam, in what was part of a string of Islamic terror attacks perpetrated in the west, on "white supremacy" and "imperialism."

Black Lives Matter is made up to a great extent by Marxist, anti-capitalist, anti-police, professional protesters who have added nothing constructive to the conversation needed about racism in Toronto.

There are significant issues of racism and discrimination that the black community in Toronto has to face, but they come nowhere near approaching those in the United States. Canada does not have America's legacy of slavery, and in Toronto prior to the late 1960's, when Pierre Trudeau initiated national policies of mass immigration and multiculturalism to diffuse Quebec separatism, the black population of Toronto was minuscule. Many of the problems within Toronto's black community is one of culture rather than skin color, and tends to be concentrated mainly within two national groups, Jamaican and Somali. Many black Torontonians of other national backgrounds actually resent Jamaicans and Somalis for the problems so rife within their communities.

But rather than a thoughtful contribution, Toronto's Black Lives Matter has thrown public temper tantrums, hijacked roadways, committed vandalism, held Toronto's Pride parade hostage, inconvenienced and insulted their fellow citizens, and largely acted as if its main purpose is to be a vanity project for Janaya Khan and a couple of its other prominent activists to get attention for themselves.

And what was the response of Toronto's politicians and bureaucrats to that? To pay lip service to Black Lives Matter, to effectively endorse them by giving them a municipal award, and to do nothing to address the real issues of racism facing the city.  Instead, in an act of characteristic uselessness, Toronto's politicians invested time, energy and taxpayer expense in passing a bylaw that bans pedestrians from texting.

Terrorists attacking the west want to undermine our strength, security, freedoms, and the basic pillars of a sane civilization. However, I can think of no terrorist group that has been consistently doing a better job of that over the last two years in Canada than Toronto's City Council.

Were Toronto to face a terror attack, City Hall is probably the safest place to be, because, unwittingly or not, the terrorists have no more reliable allies than the city's politicians.
Posted by Richard K at 3:41 PM