Former DePaul University professor and noted Jewish anti-Semite Norman Finkelstein routinely posts news stories on his websites appending them with his own comments.

There's something about being an anti-Israel Jew that seems to correlate to lacking a sense of humour and no one is a better example of that trend than Finkelstein.

Finkelstein always identifies himself as a the child of holocaust survivors, as if it gave some particular credibility to his bigotry against Israel and his anti-Jewish comments. I guess that's another trend for this breed of fanatic.

He also has made a habit of comparing Israel, a pluralistic, liberal democratic country, to Nazi Germany.

It was only a matter of time before he dropped the analogy and actually called the Israeli government  "Nazis."

Finkelstein, the "child of Holocaust survivors" who fancies himself an expert on middle east politics might want to take an undergrad course in 20th Century European history, because he either has no idea what Nazism is, or he is an idiot. 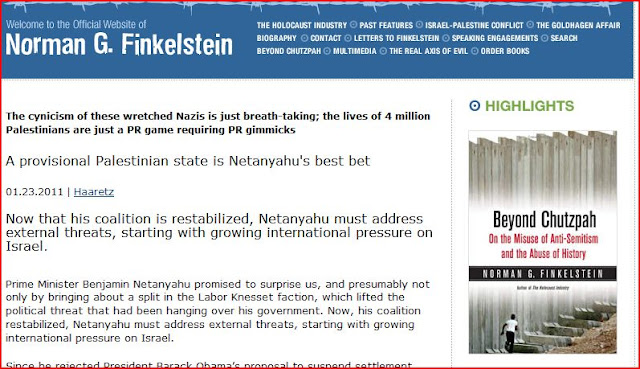 Finkelstein is driven by hate, a very deep and powerful hate. Therefore the facts are not important to him. He knows the facts, and he knows what Nazism is. But for him it is hate uber alles. Rational is of second importance, or none-whatsoever.

Finkelstein is mentally ill, for those haven't figured it out already. There's actually a reasonably decent movie that was done about this whack called

Aside from what this clod says...one should watch the movie paying attention to Finkelstein's body language and gestures. I came away convinced that his Mother really damaged him psychologically and maybe sexually too. He'd keep a team of psychiatrists busy for a very long time.

Fortunately, by now he's been well and truly outed as not just a Jew hating Jew, but as a Hezbollah terror regime supporter.

As Randy of the Trailer Park Boys would say: "He's fucked in the head!"

Harry, I haven’t seen the movie you’ve mentioned, but I have heard of it. I’ve seen another movie he was in. it was a film made by an Israeli leftwing extremist, and so was most of the audience. The filmmaker found him extremist, and the audience referred to him as sick. And that was before his appearance on Hizbullah TV.

As for the cause of his apparent mental condition, I really wouldn’t know.

You are" fucked in a head "idiots.
Prof Finkelstein is a voice of truth, honesty, integrity. He is a very courageouse, honorable man. Things ,that idiots like you, have no idea.

You provide a perfect illustration of the type of intellect that takes an unbalanced character like Finkelstein seriously.

To leak the behind of a mass murder organization such as Hizbulah on one hand, and on the other hand to say, “fuck you” to a country like Israel that jealously practice and protects the value of free speech, does not require courage. It requires the exact opposite of everything anonymous had said.