Before Turner Classic Movies, or the Moviepix Channel presented important, vintage films in their entirety without commercials, Elwy Yost was treating viewers to the best of cinematic history without interruptions on Saturday Night at the Movies.

I didn`t really know Elwy Yost, other than one very brief encounter (to be described later in this column), but his warmth, humour, and genuine, contagious love of great movies made him feel like a beloved uncle or a dear old family friend who visited my home each week during my childhood. 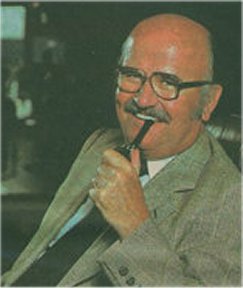 On the Ontario Educational Communications Authority (OECA), which later changed its name to TVOntario, Yost introduced me to some of the best notion pictures ever made and played matchmaker in my lifelong love affair with cinema. These were astounding movies like Lawrence of Arabia, Citizen Kane, The Third Man, Sunset Boulevard, Kind Hearts and Coronets, Inherit the Wind,  Outcast of the Islands, Mr. Smith Goes to Washington, Hangover Square, and many others that made an indelible impression. These were films that you just couldn`t see anywhere else at the time. Elwy would conduct interviews with the filmmakers and actors, many of whom were obviously thrilled to be given an opportunity to recount a time that had been neglected by a forgetful public.

Elwy died yesterday at the age of 86 in Vancouver. He moved there in 1989, but continued to film the introductions to Saturday Night at the Movies for another decade, until 1999, when he retired. I never knew him personally, but after all those years of watching him and absorbing his enthusiasm, it feels like I've lost a friend.

My only personal encounter with Elwy was rather funny and bizarre, for me anyway. There was a wonderful comedy called Champagne for Caesar with Ronald Colman and Vincent Price that Elwy used to show once in a while. It is about a genius (Colman) who can't hold down a job, and decides to go on a $64,000 Question-type game show. He insists on continuing after he wins the grand prize, and the sponsor allows it, only to find that he will be bankrupt if the genius actually collects his final win.

The movie hadn't been on in years, and in the early 90's I wanted very much to see it again. It was unavailable on video, and I couldn't find it anywhere. I was riding my bicycle down Yonge Street just south of Eglinton one day,  thinking while I was pedalling about how I should write to Elwy Yost to ask him to try to get Champagne for Caesar on Saturday Night at the Movies again, when who would step into the road just beside where I was riding to get into a waiting taxi,  but Elwy.

Shocked, I slammed on my brakes to a screeching halt and shouted at the top of my lungs, "ELWY!!!"

Poor Elwy grabbed at the taxi door with one hand and at his chest with the other, in what I'm ashamed to say might have been fright, with his mouth wide open. I really didn't mean to startle him. It was just that literally at the moment I was thinking of him, which was not a frequent occurrence for me, as if by magic, he instantly appeared.  (I've tried to conjure celebrities by thinking of them after that, but sadly Salma Hayek has not miraculously appeared on my doorstep yet.)

I then blurted out, "Elwy! Are you ever going to get Champagne for Caesar back on Saturday Night at the Movies?" Clearly thinking he was dealing with a crazy person (for which I don't blame him), but I hope realizing not a dangerous one, he said, "Fantastic movie! Love it! Gotta go!"  Then quickly got in the back seat of the cab and I'm sure instructed the driver to drive away from the loud bicyclist at the utmost speed.

He never did get Champagne for Caesar on again, but Elwy continued to run thoughtful, rarely seen films on Saturday Night at The Movies. The programing just hasn't been the same since he left in 1999. and now that he's gone, it evokes an even greater memory of those incredible discoveries that he brought to me in my youth.

Lots of us owe much to Elwy, which is why I've started a facebook campaign to name a Toronto park after him.

You can join at this link.

I am very saddened to hear about the passing of this wonderful, wonderful man and superlative television host. Elwy was a much welcomed guest in my home during the course of my childhood and teen years. SNATM was a fantastic program with Mr. Yost at the helm. Sincere condolences to the Yost family. Rest in peace, sir.

Oh my, I hadn't heard until just now. I loved Saturday Night at the Movies because of him and stopped watching it shortly after he left -- it just wasn't as good.

And I love your Elwy story -- keep up the positive thinking on Selma Hayek -- you never know!