AIGOS NICOLAOS, GREECE - Canadian Gaza Boat Sea Hitler activists have vowed to stay on the detained vessel and have begun to resort to cannibalism. Greek authorities are mystified as there are ample food stores on board and Greece has offered to provide supplies. 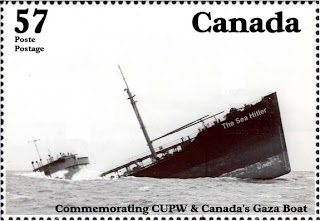 Sea Hitler cabin boy David Heap explains, "We will consume each other as a gesture of solidarity with our brethren in Gaza. As you know, Gaza has the eighth highest obesity rate in the world, and we need to fatten ourselves up further in order to make them look starving by comparison." According to reports, York University Film Instructor John Greyson has insisted he be eaten first...and slowly.


A rabble.ca report from Sea Hitler passenger Lynn Adamson confirms she and her boat mates are less "activists" than narcissistic conflict tourists:

As far as life on the boat, it has been a communal experience par excellence. We have a cook who has been feeding us through thick and thin, even bringing water up to us when we were being occupied by inspectors who wanted to take our papers (on Canada Day, leading to our march and rally through town). We have shared the boat chores and created banners, and have invented chants in all our different languages. We have learned to say good morning and 'stay human' the flotilla theme in many languages, in Algonquin you would say 'Anishnabe Debwewin.' We have been a strong team together through the heat and the stress and creative through the challenges that have come our way. Now we are united in our continued occupation of the boat.

I think we are beginning to quickly realize that the Freedom Flotilla II's intentions are not to provide aid to Gaza, and Israel has every right to protect themselves. I would like to invite you to check out Prevent the IHH Flotilla Towards GazaGet Started http://www.facebook.com/pages/Prevent-the-IHH-Flotilla-Towards-Gaza/117646254988615

I was a bit confused at the tone of the video but then realizes it was a propaganda piece from PressTV !