How dumb is Libby Davies?

Obviously NDP Health Critic Libby Davies isn't smart enough to have learned much from her last flap, when she made uninformed statements about Israel and expressed support for a boycott and sanctions against a Canadian ally that is the mid east's only democracy.That brought her extensive pillorying from across the political spectrum and even repudiation from her own party's Deputy Leader, Thomas Mulcair.

Now she's approvingly tweeting from a Sea Hitler Gaza boat support rally in France she attended  to show "solidarity" with anti-Israel activists who want to tacitly enable Hamas arms smuggling. Again, Davies has involved herself in anti-Israel activities that her party leadership has said they don't support.

Perhaps she couldn't resist, since Davies' spouse is the publisher of rabble.ca, The Sea Hitler's official media sponsor.

Davies provides another reminder that there is a dearth of intelligence at the top, and all through the ranks of the NDP. 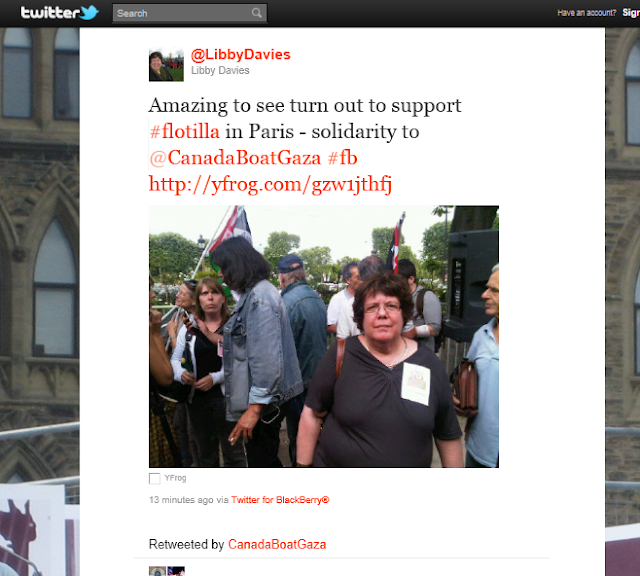 And as a special bonus, a Davies' greatest video hit:

Is this a trick question? ;)

Is the Pope Catholic?

I'll wager: a) dumber than a sack of hammers b) as witless as a Rabble poster c) as cluless as a new NDP MP..

Am I getting warm?

It seems that even within the NDP, she's at the bottom of the bell curve

Kursk, the answer to your question is a AND b.

I had a look at that picture and almost gagged.

She must be carrying at least 325 pounds on that five foot frame.

She's a human curio.
And still getting uglier every day.

Why does anybody condone what Israel does?