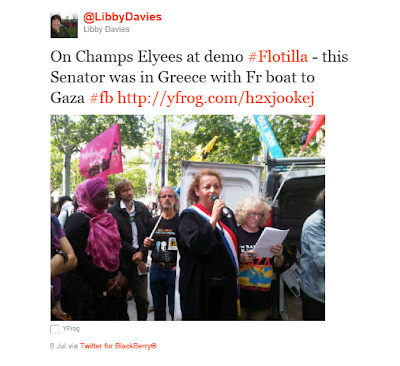 Davies not only tweeted her support for the Sea Hitler (aka Tahrir) activists, but seems to be promoting French Senator Alima Boumediene-Thiery, who spoke at the anti-Israel rally she attended. As you can see from the picture Davies tweeted, and a YouTube video posted under the authorship of rabbletv, that the tweet seems to be a still-shot from the video. So unless she's tweeting from someone else's blackberry, it appears Davies is moonlighting as a videographer for her spouse's virulently anti-Israel and sometimes anti-Semitic website, rabble.ca (or is standing so close to the rabble photographer as to be intertwined).

Senator Boumediene-Thiery, who is the star of Davies' video and one of her solidarity rally buddies, was prosecuted in France in 2010 for charges related to anti-Semitic activity, of which she has a long record. In 2003, she hosted an exhibition at the European Parliament that was anti-Semitic to the extent that Roger Helmer, the member of European Parliament for East Midlands, ripped down one of the banners as a gesture of protest. Helmer's website describes the incident:


The European Parliament played host to an exhibition, sponsored by the French MEP Alima Boumediene-Thiery, called "Apartheid israel" in which the words "Israel" and "Apartheid" were juxtaposed to form an inappropriate and racist comment, according to Helmer. The exhibition was even more inappropriate considering that it was deliberately featured during the week that Israel celebrated its 50th Anniversary of Independence.

Mr Helmer was so incensed by the display that he removed the offending banner causing the organiser of the exhibition, to accuse Mr Helmer of "violent behaviour". Ms Boumediene-Thiery MEP later sent an email to the entire European Parliament accusing Mr Helmer of "an unworthy act" and of "aggression".

Roger Helmer MEP, who has been a long-term campaigner for diplomacy and democratic resolution to conflict, said:

"I removed what I, and others, considered to be an inflammatory and anti-Semitic message.  I am a strong proponent of free speech. But there comes a point at which free speech crosses the line and becomes national and racial abuse. This is such a case."

Senator Boumediene-Thiery is a member of France's Green Party, which was co-founded by Ginette Skandrani, an individual who was closely associated with Holocaust-deniers and was eventually expelled from the party when that exposure became just a tiny bit embarrassing for them. 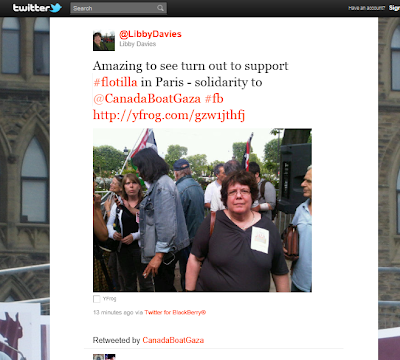 As a senior member of the NDP, now the Official Opposition, Davies association with anti-Semites and fanatics is no longer just a personal disgrace, but reflects on the judgement of Jack Layton and the NDP leadership as a whole.

It leads to the inescapable question of whether Davies' embarrassing, irresponsible behaviour reflects what we could expect from an NDP federal government, should there ever be one.


Some of the video work evidently filmed by Davies at the Sea Hitler Solidarity Rally:


The Pride of the NDP:

As much as I'd love to publish an anonymous comment in its entirety, I've had to excise bits, but here is most of it: