This is a subject that has come up over and over again.

The Toronto District School Board, whose wasteful spending and incompetence will result in a reduction in needed teaching positions, finds the money to put on expensive conferences promoting collectivism and fund policy papers and teaching guides that actually promote communism.

There is a reason that every single occasion Communists have had an opportunity to form a national government for any significant length of time, the result has been repression, totalitarianism, deprivation of basic freedoms and mass murder.

It is an inherently evil system in which the individual is devalued.

But the people running the Toronto District School Board, including Acting Director Donna Quan and Chief Academic Officer Manon Gardier, along with TDSB Chair Chris Bolton do not appear to recognize that. If they did, why aren't they doing something about the pervasive promotion of Marxist and communist ideology in the curriculum?

Reader Matt L. sent in the following information about the TDSB`s resource guide `Challenging Class Bias`which is an outright promotion of communism and a promotion of class warfare to children by our public school system:

Here they are taught to despise class enemies and that the middle and upper classes are ``agents`` of class bias: 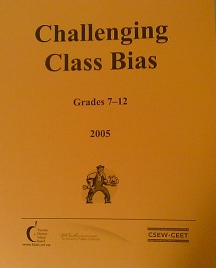 The TDSB`s ``educators`` are promoting a vapid and patently false depiction of capitalism that appears to have been arrived at by some idiot who based their information on the subject exclusively from reading the rules for the Parker Brothers`game Monopoly:

Naturally, according to the TDSB, the wealthy should be despised and a lack of a specific wealth tax is somehow a `gift`` (or a capitalist plot):

And wasteful entitlement spending could all be paid for if we only taxed the rich more and more. Evidently, the morons running the TDSB never learned the lesson from England in the 1960`s and 70`s when that approach nearly bankrupted the country, drove the wealth out, and resulted in a backlash that brought Margaret Thatcher to power for many successive governments:

And once their young charges have been sufficiently indoctrinated, teachers are commanded to tell their students to lobby government for the politicized outcomes the TDSB communists want:

This type of education is immoral and a violation of the rights due to parents and the responsibilities educators have to their students and to society.

I`ll be discussing it further on The Arena with Michael Coren tonight.

My friend Aurel Braun discussed some of this with Ezra Levant yesterday:

Can you post the full document? One wouldn't want to think you're cherry-picking from it.

It's not available online. And the selections shown here are quite explicit and are not appropriate for teaching to public school students in the context they are presented in a liberal democracy - unless of course your goal is to turn that liberal democracy into a communist dictatorship.

Depends on the context. If there are other excerpts that take the opposing view then the entire project would be an exercise in critical thinking and considering conflicting views. In my OAC History class a number of years ago my teacher taught us about ideologies we learned each one from opposing perspectives pro and con. I suppose if you'd looked at his syllabus and taken only the parts that were pro communism and left out the anti-communist parts you could probably argue exactly what you're arguing now. The selections are cherry picking and without seeing the entire document it's impossible to judge. Are the parts your showing juxtaposed against anything? You don't know. You're assuming that they aren't.

Seriously, how can you discuss this on TV when you've only seen excerpts rather than the entire document? You've just provided another reason why Sun shouldn't get mandatory carriage - a serious news organization wouldn't run with this until it had all the facts.

Well anonymous, this and other similar TDSB documents and accompanying resource guides that recommend students seek out the class-warfare promoting Ontario Coalition Against Poverty demonstrate the intent.

My source, who provided me with the material, has read it all and assured me the content is consistent.

But seriously, are you so stupid as to think something called "Challenging Class Bias" is going to have a rational, objective, critical analysis of capitalism. You'd have to be as stupid as a communist to think that.

But there's a funny thing about most people promoting communism and Marxism in schools - they don't actually have the courage of their convictions to stand up and say, "yes, this is what I am doing because I think it is right and I believe in it."

They are almost all cowards who try to weasel out of being accountable for what they are doing with lame excuses and slimy attempts at distraction.

What's the difference between a journalist and a propagandizing blogger? The first question a journalist would ask is "why hasn't my source released the entire document? Why is he leaking selectively?" A propagandist only cares if the leak fits into the grand narrative he's using and couldn't care less if it's an accurate representation of the source material or selective.

Is the next thing you are going to claim is that there are people who are actively trying to train primary-school-aged children in "activism"?

The riotous Ontario Coalition Against Poverty claims that they have a number of members (or members of their elite wing, the New Socialists) who are teachers plus others who are supporters who send youths they teach to join their organizations.

OK Anonymous - the whole thing is available from the TDSB for $15 - go buy and scan it if you want to release the entire document - the TDSB hasn't made it available online for obvious reasons.

And while it's amusing to say you're too stupid to infer the meaning and intent of a guide called "Challenging Class Bias" I suspect you know enough about Marxism to comprehend that its purpose is to promote the ideology.

It's Marxists who are pathologically obsessed with 'class', since like in so many other regards, they haven't evolved much since the 19th Century when Marx wrote his guides to oppressing individual liberty.

In those days, the class structure was for the most part quite rigid, but the success of Capitalism has made class far less relevant since class mobility and flux is so widespread as to be pretty much pervasive.

Except for nit-wit, out-of-date Communists who cling on to 'class' obsession as part of their pathetic raison d'etre.

The document is available from TDSB for $10. the reason I didn't scan the whole thing is because it's 222 pages, besides, there are copyright issues.

I scanned selectively because the rest of it wasn't outright promoting socialism/communism. Most of the other stuff was either a complete waste of time, or indirectly fostering leftist ideology, but wasn't as bad as what I had scanned.

A waste of time would be for example a lesson plan with case studies such as "Bob comes from a low income household, and one day his friend makes fun of his shoes and so he asks his parents for new shoes but they don't have enough money, how do you think Bob feels?" or something like that.
Some of the other stuff promoting leftist ideology included lesson plans about how "oh look at all these statistics about how much money the richest x number or x percent of people have, now isn't this unfair?" or case studies such as "Bob works at McDonalds under terrible conditions, the boss is evil, etc. now he wants to start a union."

The parts shown is this post are not juxtaposed against anything; there is no counterbalancing POV in the document.

The TDSB punishes the new teachers while making the top ranks richer and getting most of the opportunities.

"The TDSB punishes the new teachers while making the top ranks richer and getting most of the opportunities."

What a joke. A teacher STARTS at a suitable contract salary. Within 10 years they are collecting wages which put them at the 75th percentile of incomes in the country. Teachers ARE the elites.