The Democrats put support from the Teachers' Union above students' interests

The new documentary Waiting For Superman has highlighted some of the problems in the American educational system. 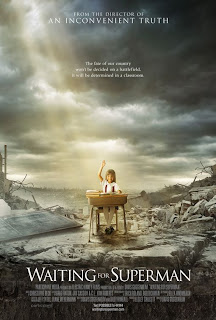 The movie was directed by Davis Guggenheim, who also helmed An Inconvenient Truth. A self-described liberal, Davis was resistant to the idea that the Teachers Union in the US was one of the major problems facing improving US schools, but as he investigated the issue, identifying them as a culprit became unavoidable.

The Teachers Union is one of the largest contributors to the Democratic Party, so US Democrats and President Obama have been reluctant to address the problem, as Tucker Carlson observes in the video below:


UPDATE: from reason.com "Waiting for Superman becomes Waiting for Godot" and Michelle Rhee, the reformist Education Superintendent in Washington D.C. who was one of the heroes of the film, resigned on Oct. 13.
Posted by Richard K at 11:04 AM