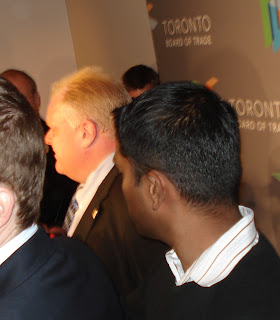 There is a much being written about Rob Ford's election on the day following his win. The Toronto Star is  both petulant and in shock, a lot of media is attributing Ford's win to "voter anger."
Ford's win is very easily and simply explained.

Ford's message throughout the campaign was "Respect for taxpayers." It was a positive message that all the people of Toronto, and not the narrow political class and a few special interests like civic unions and arts grants recipients, should have a say in how their city is managed.

The main opposition to Ford was George Smitherman, whose only message was one of fear-mongering and arrogance in what appeared to be a sense of his own entitlement to power.

And Joe Pantalone, who ran on the idea that David Miller did a good job and his legacy should continue, was trounced, receiving only about 11% of the vote. The message is clear there too. Toronto did not feel David Miller performed well in his job. 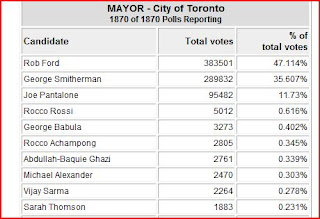 ﻿UPDATE: In a decisive rebuke to the fear-mongers who tried to smear Ford by suggesting he was a racist because he said Toronto needs to focus on its own needs before taking in more immigrants, the last poll before the election showed Ford was the clear favorite among Torontonians born outside Canada. For that group, Ford's "margin rose to 51.7 per cent, over Mr. Smitherman’s 30.1 per cent."
Posted by Richard K at 9:54 AM

Too bad GTA Ford's had no chance when newspapers out there wouldn't even print their stories when asked ...
http://www.topix.net/world/canada/2010/10/acton-tanner-staffer-email-questions-no-news-story-in-print-so-acton-not-worth-the-drive