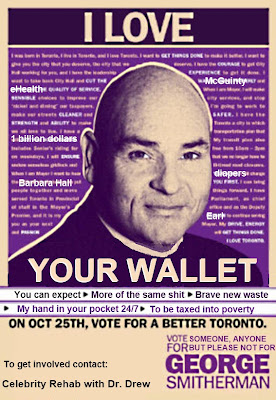 It appears a vote for George "Captain eHealth" Smitherman is a vote for instant higher taxes.

George Smitherman recently announced that if he becomes mayor, he would place former one-term Toronto mayor John Sewell as head of a municipal “government reform” panel.

This summer, Sewell wrote that the city should impose its own municipal sales tax.

"The city needs its own sources of tax revenue, like its own sales tax. A one per cent tax on goods and services raises about $700 million in Toronto per year"
John Sewell, prospective Smitherman appointee

Can you feel the cruel chill of Smitherman's hand reaching for your wallet yet?