Royson James, one of the few columnists at al-Starzeera who hasn't been driven over the edge of sanity by Rob Ford, wrote an astute article on Saturday that points out some of the attraction Ford has for Toronto's voters.


Ford doesn’t have to define himself during this campaign. Over 10 years as a city councillor his message hasn’t deviated: Keep spending in check. He owns the brand.

Starting with his own office budget, Ford famously spent $2 of the allotted $53,000 tax dollars one year, even as many spent near the limit and most spent about $40,000. That created many enemies among the big spenders. Some argued he was using his own money to run his office and tried to force him to use tax dollars.

The result? Now Ford must file the spending amounts with the clerk, even if he uses his own money. But all this has done is reaffirm that Ford spends much less than his counterparts, no matter whose money it is. And the legend grows.

Critics argue that the potential savings from office budgets is so small, the impact on the $9.2 billion budget is negligible. Critics underestimate the value of symbols. If councillors routinely waste thousands of dollars on the purchase of espresso machines, bunny suits, expensive Christmas cards, unwarranted cab rides to Woodbridge late at night — all under the guise of serving constituents — what else are they wasting, constituents wonder.

It sure got me wondering. 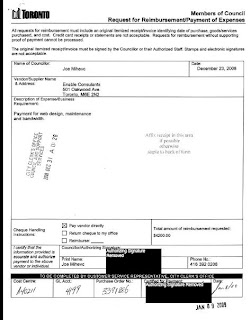 So I took a look at some city councillors' expenses.

Although that sounds almost paltry compared to Ward 32 Councillor Sandra Bussin's  $27,000 in the "advertising and promotion" budget line. And that doesn't even include her notorious "Bussin Blue Jays" which came out of the approximately $15,000 she charged to "other expenses" since 2008.

(And "other expenses" isn't all other expenses..oh, no, not by a long shot. It's just stuff that doesn't fit into one of the many other budget lines expensed by city councilors.)

Advertising and promotion of what!!??!! 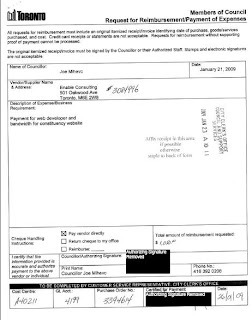 When Ford spends next to nothing of his $53,000 office budget, and is critical of big spenders on council, among whom Mihevc is one of the biggest, James is right, it 's got to create some resentment.

But that resentment might be on the voters' side and work for Ford. Particularly when one sees where some of the "slush fund" gets spent.


Council expenses can be viewed here. 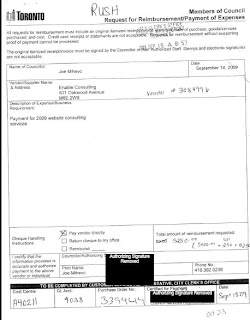 And Joe, that's some great website we paid for.  I probably could have got you a better deal. Or you could have just gone to blogger.com and set one up for free and saved us that money. Still, who cares if you may have overpaid? It's not like that money came out of your pocket. 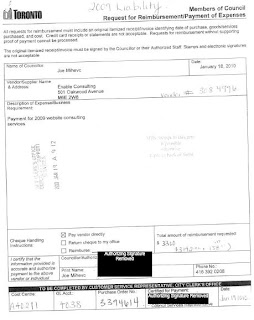 I notice my councilor has quite a few business meetings in restaurants where the name of who he met with is blacked out. I also note he spent nearly $3000 on something called "movie night" - have no idea what that is.