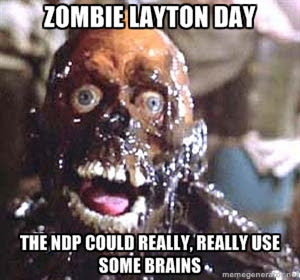 Jack Layton was an okay guy whose only significant political talent was the ability to convey the image of being likable, particularly to people who never actually met him. (I did many years ago and found him smug and arrogant at the time - but I heard he matured and improved later.)

Let's be honest about this - there is no Layton legacy. The man was lucky enough to have capitalized on the implosion of the Bloc Quebecois and pick up some parliamentary seats in Quebec. Period. Nothing he did will have a lasting affect on Canada.

Fifty years from now, no one will remember who Jack Layton was - hell, five years from now, for the few people who still think of him , he`ll be just someone who was the subject of a bad CBC drama.

I was never a fan of Layton`s politically, but would have been happy to let him rest in peace. However the NDP, which was crass enough to take his corpse on a political tour, now is trying to exhume their late leader for selfish, abject political promotion.

If that`s the game the NDP wants to play, with their cheerleaders at the CBC and The Toronto Star, then we need to call it for what it is. Jack Layton Day is a big public, partisan political commercial.

So if anyone bothers to tell me "it`s Layton Day," I`m going to respond, "Jack off!" 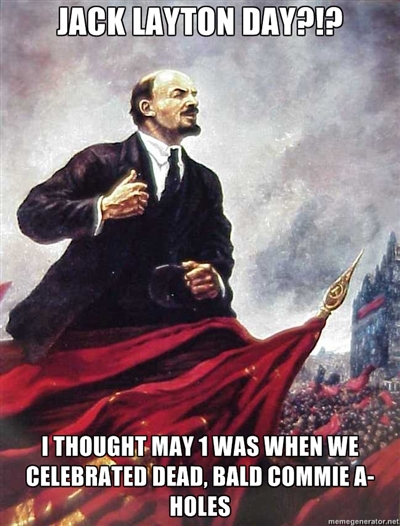