One of the more challenging responsibilities of the Ontario Legislature's Sergeant-at-Arms is having to decide which groups are allowed to hold rallies on the Legislature's grounds at Queen's Park. The current holder of the Sergeant-at-Arms position is Dennis Clark and his role is within the Civil Service and is supposed to be free of political interference.

There are frequently demonstrations denouncing the ruling party of the day and if reflects well on us as a democratic society that such events are sanctioned at the seat of government. But decisions about such maters would be substantially more credible if they weren't being made by someone whose official costume made him look like a cross between a baritone about to start singing, "I am the monarch of the sea" and Mr. Bumble from Oliver Twist.

There are limits to what would be considered acceptable discourse that deserves the imprimatur of the Legislature's acquiescence. A racist group calling for the extermination of a nation would not normally be afforded that privilege, nor would one that openly displays support for terrorist organizations that are illegal in Canada.

An Al Quds Day rally to be held at Queens Park next Saturday at 2 pm seems destined to fall into those latter categories.

Mr Clark is in the unenviable position of having to predict, like in the movie Minority Report, crimes that might be committed in the future before denying an application for a rally. "Very seldom do we deny something unless they came in and they told us that what they were going to do was unlawful"  Clark told The Toronto Sun.

But a magical psychic gift isn't really necessary to know what will happen at the Al Quds Day rally nest week.Mr. Clark may have neglected to perform the rudimentary research into the nature of Al Quds Day that shows its hateful, violent nature and origins.

The event was created by Iran's despotic Supreme Leader, the Ayatollah Ruhollah Khomeini. A bloodthirsty degenerate, Khomeini led a regime known for systematically raping women for the supposed crime of 'immodesty' as well as the routine torture and murder of political opponents.

Khomeini designated the last day of the Muslim month-long festival of Ramadan at Al Quds Day, to promote the Islamic world to rise up and destroy the state of Israel. Regrettably, Khomeini has acolytes in Canada, such as the hate-monger Zafar Bangash of the York region Islamic Society and the Canadian Shia Muslim Organization, which were the forces behind last year's Queen's Park Al Quds Day rally.

At the 2011 gathering, Zafar Bangash called for a Jihad against Israel and in an apoplectic fit, made a racist reference to US President Barack Obama as "that black man in the White House." Flags of  Iranian-backed Hezbollah, designated an terrorist group by the Canadian government, flew prominently at last year's al Quds hate fest at Queen's Park. What made matters substantially worse was that a representative of Mr. Clark's Legislative Security force abused her authority by trying to deny the legal right of a blogger to photograph women holding the Hezbollah flags because it would offend "Muslim sensibilities." 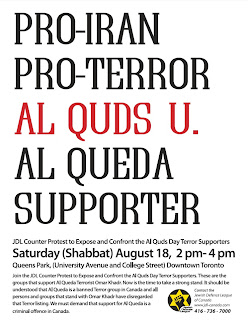 The Jewish Defense League will be at Queen's Park on Saturday to hold a counter-protest against the Khomeinist fanatics.  If the powers that be are too afraid of offending a hate group's sensibilities to stand up to them, it is refreshing that there are free citizens who believe in Canadian values and don't share those fears.