The event is being held by the Canadian Shia Muslim Organization (CASMO), a group notorious for posting anti-Semitic videos by a Ku Klux Klan leader on its website, and having held a hate rally at Queen's Park last year in which speakers engaged in racist and Jihadist invective.

The Mayor's office expressed disappointment that the al Quds would be proceeding, but the City's Facilities Manager and the City of Toronto's Deputy Manager decided the event did not breech civic policies. Al Quds Day is an invention of Iran's Ayatollah Khomeini intended to rally Muslims to the cause of the destruction of Israel. Al Quds Day gatherings frequently feature anti-Semitic and violent rhetoric.

Toronto Ward 10 Councillor James Pasternak said he is "astounded that City re-booked facilities to this group after all we went through last year." He added "this group clearly does not meet the threshold for respect or tolerance we expect of those using City property." 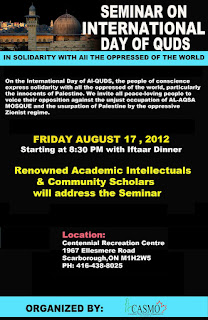 Mayor Ford's office expressed its serious concerns about the Iranian-linked group's use of municipal property and insisted the event be closely watched by City staff to ensure compliance with civic regulations regarding Hate Speech.

Councillor Pasternak expressed the hope that City staff would ensure the usual "demonization and hate" that are routine at al Quds Day assemblies does not take place on grounds that are the responsibility of the City of Toronto.

UPDATE:  A well-placed source at City Hall believes that the Manager of the City's Office of Equity, Diversity and Human Rights must have been consulted by the Managers who decided to allow the seminar and dinner to proceed. That office is headed by Pakistani immigrant Uzma Shakir, who has written that Muslim immigrants do not owe their full loyalty to Canada because of the Canadian government's favoritism towards Israel.
Posted by Richard K at 12:49 PM