The NDP wants to use August 22 as part of their ongoing effort to beatify Canada's all-time most famous mediocre politician.

It might sound innocuous, but it's part of a sneaky, insidious, never-ending campaign to weasel the NDP's socialist agenda into the mainstream by deifying the smug image of their late snake oil salesman,  Smilin "Community Clinic" Jack Layton.

So let's take back the normal calendar day of August 22 that they want to abuse and here's how.

memegenerator.net lets you make posters online easily and free (there may be others, this is just the one I know about offhand).

Go there and create your own Jack Layton Day poster. Put it on your facebook page, post it in the comments here, spread it around.

August 22 used to be a nice, wholesome day. Let's keep it that way.

Create and embed your own! 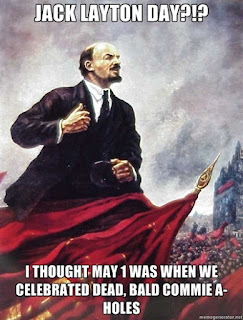 Stephen Taylor did this one: 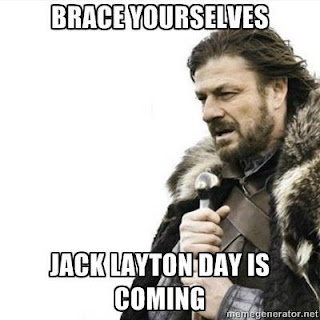 After a 300 foot steel statue of Jack is finally erected in Ottawa, Toronto, and every city in Quebec, every day will be Jack Layton Day!

An erect Taliban Jack would be hard to top.