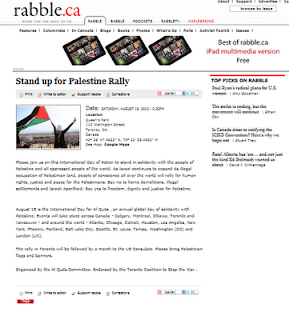 She isn't charismatic and is far from being a leading intellectual light in a political organization not particularly known for its sagacity. But Libby Davies is the darling of the assiduous activist wing of the New Democratic Party. To mollify that essential bloc, as a matter of expediency, newly elected party leader Thomas Mulcair had to retain her as NDP Deputy Leader.

Unfortunately for Mulcair, heavy, squalid baggage comes along with his Deputy Leader, doing more damage to the NDP's reputation with the general public than the benefit derived from energizing the far left of his leftist political party.

As responsible political leaders across Ontario are speaking out against a hate rally scheduled to take place this Saturday, the spouse of the Deputy Leader of the National NDP is promoting it.
Davies' same-sex spouse Kim Elliott is the publisher of the fanatically anti-Israel website rabble.ca, which has prided itself on being the media sponsor of the anti-Semitic hate fest its organizers call  "Israeli Apartheid Week."  Davies frequently appears at rabble-supported events and now her wife's website is promoting an anti-Semitic al Quds rally in Toronto. While rabble euphemistically calls it a "Stand up for Palestine Rally" the notorious event they are promoting is actually a call for the destruction of Israel by followers of Iran's late Ayatollah Khomeini and regularly features speakers espousing anti-Semitic conspiracy theories.

Davies being a huge problem for the NDP seems to happen with some regularity.

She has introduced crackpot conspiracy theories in Parliament in which she repeated accusations of the US government being complicit in the 9-11 Muslim terror attacks on the World Trade Center and Pentagon. Equally embarrassing to her party, Davies is obsessively fixated with demonizing Israel, despite being remarkably ignorant of the history and issues affecting the Israeli-Arab and Israeli-Palestinian conflict.

When the NDP had both the Conservatives and Liberals on the ropes over the release of documents related to the torture of Afghan prisoners at times when both those parties had been in power, Davies single-handedly managed to derail her party's advantage with her prejudices. Appearing at a virulently anti-Israel rally, she gave an impromptu interview on video in which she expressed support for a total boycott of Israel while adding statements suggesting the Jewish state had no legitimacy.

The Liberals and Conservatives pounced on this opportunity, putting the NDP on the defensive and it was about Davies' shocking utterances rather than the Afghan issue that the 2010 summer session of Parliament closed. Davies was even reprimanded by senior members of her own caucus, including then co-Deputy Leader Mulcair.


Mr. Mulcair said that Ms. Davies.. should also apologize and retract her comments supporting a boycott. He said it is particularly “egregious” since she is a deputy leader of the party.“As much as it’s difficult, if any individual member of Parliament goes off-script on any issue of policy that is well-defined by the party, it would be a problem,” said Mr. Mulcair. “But that problem is of course compounded in the case of someone who putatively, with the title that she holds, would give more weight to these views that are not the views of the party.”

Like an addict who needs a fix, despite al the damage she had done to her own party and her collegues' warnings, Davies could not help herself and returned to the issue. She could not restrain herself from  boasting about attending an anti-Israel rally in Paris featuring a French politician who had been prosecuted for anti-Semitism.

The days of Libby Davies humiliating the New Democrats are far from over. How long Thomas Mulcair lets her do it from one of the party's top positions is an interesting question. Without doubt, the Liberals and Tories would like to see it continue for as long as possible.

"How long Thomas Mulcair lets her do it from one of the party's top positions is an interesting question."

Commies can't cut their idiots off without damaging their credibility with their idiot followers.

One of the advantages we have up here is that it's easier to demote a deputy leader than to get rid of a sitting VP.

Wasserman Shultz was elected, so it's up to her district to decide if she stays in Congress, just like Vancouver East, which has the highest rate of heroin addiction in Canada, is likely to keep sending Davies back to Parliament. But Mulcair can reshuffle his shadow cabinet any time he likes.

What vangrungy said. Dippers aren't so much humiliated as exemplified by Libby. Mulcair, no fool, knows this and does the dance to give the impression of centrist/moderate/sane leadership. It's crap. Dippers are bonkers and everyone sober over 30 knows it. And I'm talking about actual party members, not the people that vote NDP. Plenty of regular people vote NDP for various bizarre reasons.

The longer Mulcair keeps someone like Davies as Deputy Leader, the less competent and rational he appears.

It is probable that, despite Tommy Muckliar's protestations, Miss Davis' statements do reflect private Party policies.