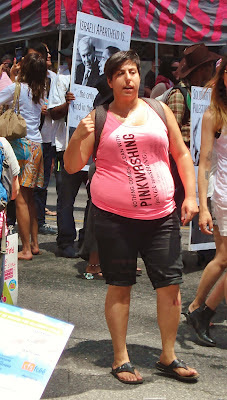 The Executive Director of Toronto`s Social Development, Finance and Administration Department sent a report to the city`s Executive Committee that would allow Toronto`s Pride parade to receive civic funding despite inclusion of the anti-Semitic hate group Queers Against Israeli Apartheid.

The report was done in consultation with Toronto`s Equity, Diversity and Human Rights Division. That division is headed by Uzma Shakir, a Sharia Law advocate who has written that Muslim immigrants do not owe full loyalty to Canada because of the government`s pro-Israel policies.

As New York Times columnist Thomas Friedman wrote,"Criticizing Israel is not anti-Semitic, and saying so is vile. But singling out Israel for opprobrium and international sanction out of all proportion to any other party in the Middle East is anti-Semitic, and not saying so is dishonest." By applying a standard to the Jewish State that is different to the standards to which any other country is held, Queers Against Israeli Apartheid, despite containing some Munchausen Jews (idiot Jews and fake Jews who only proclaim their religion for the purpose of defaming Israel and currying favor with Islamists and Marxists)  is clearly anti-Semitic.

Toronto`s City Council has the right to disregard the biased report that was submitted. Giving tax funds to an Gay Pride that serves as a platform to a a group that attacks the only Gay-positive country in the middle east while aiding groups that persecute homosexuals is obscene.  That they want to suppress Jewish national self-determination in the name of promoting Palestinian self-determination is perverse.

If a Nazi-admired group like Queers Against Israeli Apartheid want to march in a parade, let them do so without any subsidies from Canadian taxpayers. Or better still, let them hold a parade for their murderous  `friends` in Gaza or Tehran.
Posted by Richard K at 7:31 PM