"The Canadian Auto Workers (CAW) and the Communication, Energy and Paperworkers (CEP) are merging to create Unifor, the largest primarily private sector union in Canada with about 300,000 members."

Gary Engler, who wrote that description quoted above from the neo-Marxist website rabble.ca,  is the vice-president of the Local 2000 of the later of those unions soon to merge into the mega-union.

He is also the co-author of something called the New Commune-ist Manifesto which is essentially an argument for communism to dominate labor and politics in our society. In other words, he's another idiot who has learned nothing from the lessons of North Korea, Cuba, the Soviet Union, Pol Pot's Cambodia, and the 100 million murders and totalitarian misery that communism has inflicted on humanity since the Russian Revolution. 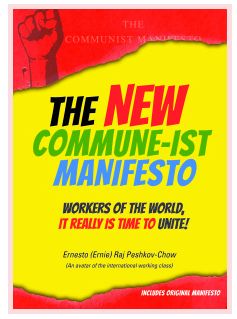 Canada's Parliament recently voted for union accountability in the form of Bill C-377, which was quashed by the Senate, adding to the many reasons to abolish that anachronistic, useless body of unelected patronage appointees.

Engler's description of his vision for the new Mega-Union is one that does not focus on workplace issues but one that infests the workplace with political and activist issues. That is precisely the cause of the backlash against unions that led to the House of Commons passing Bill C-377. But
someone who is still a communist in the year 2013 is not likely to be someone with the ability to process a great deal of information.

Unfortunately, Engler is far from alone in the way that union bosses think. They are, as a group, narcissists who want to dominate political thinking and shape it to their despicable manifestations of activism. That activism materializes in many reprehensible ways, be they the racist "Occupy Movement,"  the violent, mentally unbalanced cretins of the Ontario Coalition Against Poverty, or the terrorist-enablers of The Sea Hitler. among countless examples.

Engler wrote: "The promise of Unifor is in a rebirth of militant union activism."  The bad news is that in the short-term, militant radicalism from union fanatics may increase with the birth of "Unifor.`The good news is that if Unifor bosses behave as Engler hopes, and with the government promising to reintroduce Bill C-377,  it could be the final straw that breaks the backs of politicized unions in Canada.