Jon Kay makes some excellent points in his latest piece for the National Post: 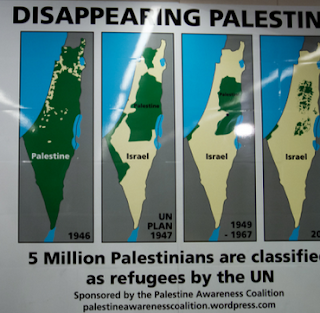 ...It would be nice if Vancouver transit riders could be educated about the intricacies of the Middle East conflict with a single ad. But alas, this one leaves out some crucial information. The second panel, marked “UN Plan 1947,” for instance, might have informed the reader that the depicted distribution of land was unanimously rejected by Arab nations, which then massed armies on Israel’s border in order to annihilate the nascent Jewish state. Nor does the ad depict the distribution of land contained in the peace deal offered to Yasser Arafat at Camp David in 2000. Oh, and the part about “five million” Palestinian refugees might have mentioned that this number has been artificially inflated by a unique UN provision, applicable only to Palestinians, extending the definition of “refugee” into intergenerational perpetuity.