There's an internal war going on in the New Democratic Party over Israel. The party's hard-core, anti-capitalist, loony-left fanatics have the end of the Jewish state as part of their religious canon. However, as crazy as he knows they are, and distasteful as he finds the fanatical bigots in the NDP,  party leader Thomas Mulcair is in a difficult position with them.

The hard left and their effective leaders Libby Davies and Megan Leslie represent the zealous activists who do lots of the party legwork during elections, and they make up a core part of NDP support. But by appealing to the nutcase left, the NDP simultaneously alienates voters who aren't ideologically rabid fanatics. To make the NDP more palatable to sane voters, Mulcair has done some work to sanitize the party, recently keeping hateful anti-Israel candidates like Paul Manly from seeking the party's nomination for a federal seat. But he also has to tread the fine line of continuing to engage the NDP's worst elements.

That tightrope Mulcair is walking is a difficult one, and increasingly so as with an apparently deliberate effort by his Deputy Leader Libby Davies to undermine him.

Davies severely embarrassed her party and ruined an opportunity for the NDP to capitalize on the Conservative and previous Liberal governments' handling of the Afghan file by become a major distraction with her anti-Israel rhetoric in 2010. In a statement made to a citizen journalist in a YouTube video, Davies' effectively said that Israel had no legitimacy as a country. The upheaval that report caused in the media and among her own party led to Davies being condemned by Mulcair and a humiliating pilgrimage by the late NDP leader Jack Layton to Israel's ambassador in Canada to apologize for her comments.

In the aftermath of that 2010 catastrophe for the NDP,  Davies was told in no uncertain terms by the party leaders, including Mulcair, to stay away from commenting on international issues that had no bearing on her brief as Health Critic. But among the many things of which Libby Davies can be accused, being bright or good at impulse control are not among them. Davies continued to occasionally veer into outbursts about Israel, such as with her support for the Sea Hitler flotilla that attempted to break the arms embargo of the terror group Hamas.

Now, just days after NDP leader Mulcair issued a balanced call for the cessation of hostilities and blamed Hamas for the continuation of violence, Davies is undermining her party leader by endorsing a petition which places all the blame for the Gaza crisis on Israel.

Composed by her fellow NDP Sea Hitler supporter, Quebec MP Alexandre Boulerice,  the petition completely neglects to mention Hamas but does state: "There is only one solution to achieve this for both Palestinians and Israelis: putting an end to the occupation of the West Bank and the siege of Gaza. " Absent from Boulerice's and Davies' reasoning is that the blockade of Gaza was caused by the launch of missiles from it and the fact that it is controlled by a terror group committed to not only the elimination of Israel but the murder of any Jew it can find. The West Bank occupation continues, despite many offers that would have given the Palestinians a state of their own, because no Palestinian leadership has been found that would negotiate in good faith.

The Davies wing's resentment of Thomas Mulcair is well known. Murray Dobbin, a columnist for rabble.ca, a radical, far-left online magazine published by Libby Davies' spouse Kim Elliott, recently sent out an email encouraging NDP supporters to withhold donations from the party. Dobbin's email pronounced:   "...Mulcair sucker-punched Vancouver MP Libby Davies for a Youtube interview in which Davies criticized Israel's illegal occupation. It was a disgusting betrayal of NDP principles and ended up with the humiliation of Jack Layton who went cap-in-hand to the Israeli ambassador and apologized. It was a low point in the NDP's and Layton's history. Fortunately, a wave of protest prevented Layton from demoting Davies. Now Mulcair, a devoted Zionist who refuses to adhere to the NDP’s policy on Palestine, is at it again...Just another reason to boycott all NDP fund-raising appeals until the party begins behaving in a principled manner worthy of a social democratic party."

The Davies wing of radicals within the NDP want to use Israel as a dagger to stab Thomas Mulcair in the back. Whether Mulcair can strike a balance with them, is undermined by them, or is forced to discipline them is something that will be a very interesting situation to watch unfold in the coming months before the next election. 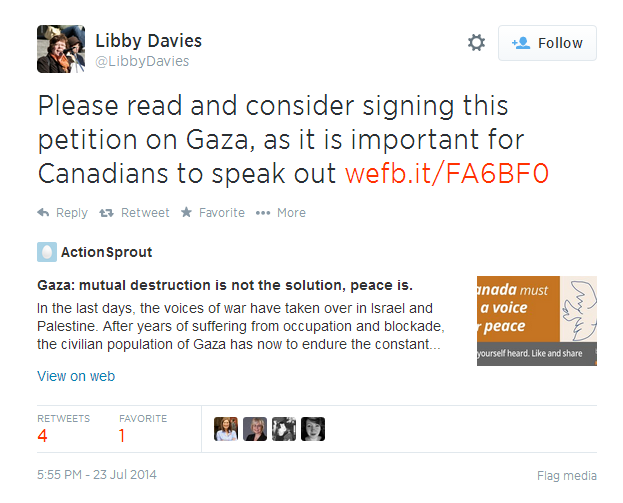 Let the hard lefties in the NDP stab Mulcair to death, for all I care. May they eat their own tail in mayhem and confusion.