Hezbollah Commits to an All-Out Fight to Save Assad


This is the time for the West to take a stand, to severely disempower Hezbollah and continue to shake up the Middle East.  No response  will be a signal to Iran that they can continue their mischief...and worse. 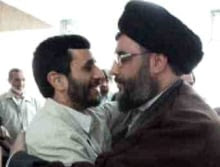 BEIRUT, Lebanon — The leader of the powerful Lebanese militant group Hezbollah decisively committed his followers on Saturday to an all-out battle in Syria to defeat the rebellion against PresidentBashar al-Assad. He said the organization, founded to defend Lebanon and fight Israel, was entering “a completely new phase,” sending troops abroad to protect its interests.

Oh course they do. They are a proxy for Assad.