Racist tribalism and indoctrination are now part of the TDSB curriculum

Racism still does exist. Yes, despite ongoing efforts in North America to eradicate antiquated bigotries that lead people to prejudge and discriminate on the basis of pigmentation and ethnicity, racism still happens.

Fortunately, there's a lot less of it and racists are generally reviled and marginalized.

Unless they happen to be running your local School Board or planning the curriculum for your Education Department. In that case, they are paid to promote a new form of racism that masquerades as "social justice."

A lot of people who throw around that term "social justice" as a goal and a mindset are the same people who admire a racist, totalitarian mass-murderer.  These same people talk about producing "critical thinkers," in the education system but that term too is deceptive. "Critical thinking" for them means to think exactly as they do without dissent. 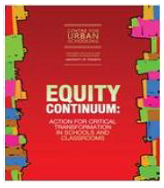 With the aid of the Ontario Institute for Studies in Education, whose programs are essentially a collection of neo-Marxist ideologies, the Toronto District School Board has a plan in place to promulgate their insidious brand of "social justice" in public schools to produce conformist "critical thinkers."

Together they developed an ominous-sounding guide called Equity Continuum: Action for Critical Transformation in Schools and Classrooms which is designed to be a tool for "focused interventions" in school communities.

The TBSB's goals may not be the same as white supremacists, but the methods are similar.

Not so long ago, school clubs were for facilitating the playing of chess, or for rocketry, drama, etc. Their membership was determined by common interest. Now, rather than treating children as individuals, they are grouped by race into such TDSB promoted programs as an "Afrocentric" school or as the Equity Continuum Guide calls for, providing space for "identity groups." 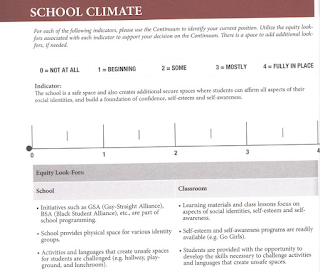 In other words, your school is promoting the separation of students into racial tribes.

Categorizing people by race has had deplorable outcomes throughout history. It is no surprise therefore, with the revisionist history that is now taught in Ontario's schools, that history is a subject from which the Ministry of Education and Toronto School Board's heads have learned nothing.

The sneak peek at the Equity Continuum shows Wynne gives it an endorsement...
http://cus.oise.utoronto.ca/UserFiles/File/EquityContinuumSamplePage.pdf

Ah, yes. Did not the Great Leader say she was going to be the "Social Justice" Premier?