Rob Ford lookalike discovered! Was it a double in the "crack video"?

A Rob Ford lookalike was discovered vacationing in Cuba recently.

The Toronto Mayor has categorically denied he is the person in a video purported to be of him smoking crack cocaine.

One thing IS certain - Rob Ford is not the only person in the world, or even Toronto, who looks like Rob Ford.


UPDATE!: Someone was trying to hire a Rob Ford lookalike for a video a while back. Gee..I wonder why anyone would want to make a video with someone who looks exactly like the embattled mayor of Toronto.. 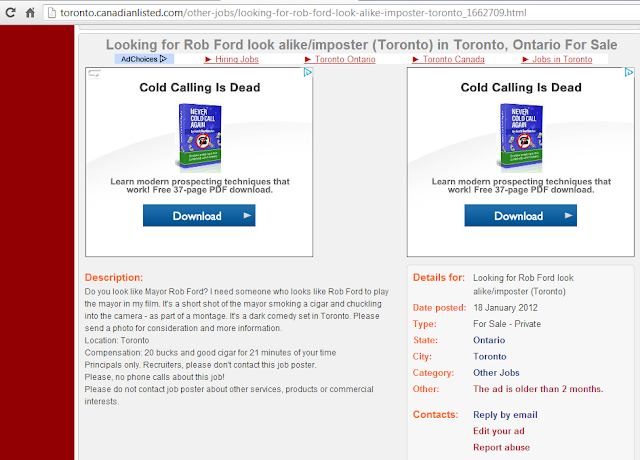 I have had people call me "Rob Ford" before. Also been compared to Chris Farley :S

That dude looks a bit like Ford but not a dead ringer. Plus his voice is totally wrong.

Depending on quality of video he may not have to be a dead ringer. Do we know if there's any audio on the supposed video?

According to reports, yes, there is audio.

If there's a Rob Ford lookalike in Toronto, I'll bet I know who it is, although I don't know his name. On Family Day a friend and I saw a comedy routine by a troupe downtown and there was a guy in it who looked like a younger Rob Ford - exactly like him! He didn't do any Rob Ford impressions during the show, but he did do a very funny sketch where he was seeking a roommate and answered an ad from someone who turned out to be Karla Homolka. If there's a "Slurpy", I'll bet that guy's it!