It's the year 2013 and you're in Toronto, the most multicultural, ethnically diverse city in the world. If you were to hear someone talk about how there is a "racial hierarchy," of which white Christians are at the top, you might surmise you were listening to an anachronistic, neo-Nazi idiot who somehow had remained oblivious to the societal advances of the last five decades.

But there's another kind of person who is a proponent of fatuous race-based prejudices. The kind that teaches about racist-sounding subjects like "whiteness theory" and "critical race theory" at the University of Toronto's Ontario Institute for Studies in Education, the premier teachers' college in Canada. 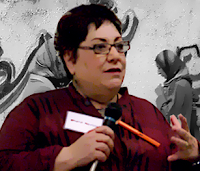 The name Sheryl Nestel may sound familiar. She is an academic, but if you recognize her name, it's not for any noteworthy academic accomplishment. Nestel is a teacher at OISE who was at the center of a controversy at the end of 2010, when a thesis of which she was the academic adviser was denounced by a provincial Minister and others in the Ontario legislature for being anti-Semitic.

And why does she believe that many Canadian Jews support the government of Stephen Harper, which she describes in terms so scathing that anyone ill-informed enough to believe them might confuse our Prime Minister with Benito Mussolini?  Certainly not for proficient economic stewardship of the country during a worldwide economic crisis. Nor for sound foreign policy or a cohesive national energy strategy. Nestel concludes that Jews support the Conservatives to reap the "rewards of white supremacy." The OISE professor continues to describe Jews, who in Canada maintain a wide range of political affiliations and diverse public opinions, as "a community anxious to conceal its ideological divisions and maintain its place in the racial order."

Nestel's tome contains such bizarre, anti-Jewish, conspiratorial accusations, it would make a worthy appendage to the notorious Czarist anti-Semitic forgery, The Protocols of the Elders of Zion. Among her preposterous, paranoid allegations, Nestel claims to have "identified an “international racial contract” that extends across nationally defined borders and assumes a collusion of interests between the Canadian and the Israeli states."

She also charges that:


"Jews in Canada can be seen in their support for the Conservative government and its policies as being on the “right” side of the “clash of civilizations” a stance which solidifies Jewish whiteness and obscures ideological, sociological and historical differences within the Jewish community. This deal with the devil has been engineered by a small group of prominent and wealthy individuals including Canadian business moguls Heather Reisman and Gerry Schwartz, who managed to dissolve the quasi-democratic Canadian Jewish Congress, replacing it with the Committee for Israel and Jewish Affairs (CIJA), a non elected body that dictates Jewish politics across Canada."

Nestel's article is consistent with the sloppy academic belching that characterized the theses she guided which caused the University of Toronto such embarrassment two years ago. She is associated with a highly politicized program at OISE in which adherence to radical ideologies evidently supplants actual education. Part of the program's creed is opposition to Israel and Zionism.

Interestingly, Nestel admits something that her fringe group generally denies, but is well known in Canada's Jewish community; that most anti-Zionist activists like her who self-identify as Jews have no real connection to Judaism, but make their proclamation  "to deflect charges of anti-Semitism leveled at those who work" to deligitimize Israel.

Academic freedom is an important principle, and Nestel is entitled to her views, as appalling as they may be. But it is worrisome that students at the University of Toronto's OISE would be indoctrinated to such nonsense without getting a sane counterbalance. For the benefit of its students, it should be incumbent upon the university to ensure that fair balance is a guaranteed part of their education.

Richard you claim "Nestel admits something that her fringe group generally denies, but is well known in Canada's Jewish community; that most anti-Zionist activists like her who self-identify as Jews have no real connection to Judaism" but what she actually says is "While I’m non-believer and not even remotely spiritual, I genuinely care about Jewish culture, about the Jewish future and about the moral life of the Jewish people."

Sounds to me like you're misrepresenting her words in order to fit your thesis. A bit strange for you to imply that you can only be Jewish if you are religious when you yourself have said you're non-believer, isn't it?

There's no misrepresentation at all, Yorkie. I know plenty of evangelical Christians who "genuinely care about Jewish culture, about the Jewish future and about the moral life of the Jewish people" but they don't represent themselves as Jews for political advantage.

As to being religious or non-religious, it's irrelevant, but being an atheist, or as is the case with some "Independent Jewish Voices" members of denominations like the United Church or Muslim members (now those really are 'independent' Jewish voices) the representation of themselves as Jews for the sole purpose of demonizing Israel is both dishonest and transparent.

As to me being a "non-believer," I'm not sure where you are getting that. I believe in God, I just don't take religious practice seriously. However I don't make any representations as a spokesperson for any religion. My support for Israel is based on an examination of fact and it being a pluralistic liberal democracy fighting against fanatical, genocidal totalitarians (and their useful idiots).

It might - If I ever start representing myself as a spokesperson for Jews, you should call me on it.

So any Jew who isn't religious can't speak as a Jew. Tell it to David Ben Gurion ... and almost every other Jewish 'leader' in the past century.

Your an idiot! (Or more likely, you know that that is crap, and you're just dishonest

Aside from your fixating on a minor point of the matter, no, you seem to lack the ability to grasp what I wrote, Sam. It has nothing to do with degree of religiousness. But if someone says they don't believe in God, and only proclaim themselves as a "Jew" for the sole purpose of demonizing Israel, then I think it's pretty obvious who is full of "crap."

But thanks for stopping by. People like you are always good for a laugh.

Yorkie and Sam, you are missing the point:
Nestle represents Judaism in the same way the Neturei Karta (ultra ultra orthodox) lunatics represented Judaism when they went to Tehran to participate in the Holocaust-denial conference of Hamedinejad. Did the fact that they had black clothes and long sideburns give extra credence to the claim that the holocaust never happened?
The Jewish people have their share of lunatics. To claim that they represent Jewish thought is equivalent to letting the lunatics represent the asylum.

Nestel says "While I’m non-believer and not even remotely spiritual, I genuinely care about Jewish culture, about the Jewish future and about the moral life of the Jewish people."

Why should she genuinely care about any of these things? What part of the Jewish future does she genuinely care about? One where the Jews wander around from place to place, without a country of their own, as guests in somebody else's country, hoping and praying that maybe they won't get slaughtered or expelled or locked up in a ghetto or methodically rounded up and sent to a death factory? She genuinely cares about "the moral life of the Jewish people"? Where is her commission appointing her judge of the morality of the Jewish people? If she thinks she's some kind of modern-day Jeremiah or Isaiah, then she better start practising getting "spiritual", because secular prophets are really lame. I'm really curious - as someone who doesn't like the Jewish religion, 99% of the Jewish community, the one and only Jewish country on this planet (and the only one that has existed since people spoke Latin in day-to-day conversation), and probably has dim views of male circumcision and the preparation of kosher meat, what part of Jewish culture does she like???

I'm guessing bagels and not much else.


People like Nestel are always wrestling themselves into rhetorical pretzels in their failed efforts to maintain any logical consistency to what they say.

Much of what they don't say is that their real religion is communism and they see Israel as a soft target in the "war against global capitalism." One of her "Queers Against Israeli Apartheid" cohorts, a Ryerson University Sociology professor named Alan Sears, made that more or less explicit.