How to determine if someone is a moron: a) they take Alice Walker seriously

Alice Walker, on her personal blog, has weighed in on the acquittal of George Zimmerman for the charge of murdering Treyvon Martin. 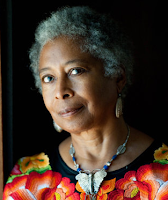 As is usual for her, Walker has nothing intelligent to contribute.

However, some people evidently think that by virtue of her having written an acclaimed novel, Walker is a person whose opinion should be valued.

Those people are idiots.

Alice Walker is a person who has expressed support for the deranged mental case, David Icke, and his demented ravings about alien reptiles controlling the Earth.

She repeated her insane idiocy in her blog post about Treyvon Martin in which she wrote: "if we are dealing with descendants of the Chitauri (See Credo Mutwa's informative teaching on the subject of the subject of cold blooded reptilian ancestry of some humans) [Walker's parenthetical notation] then we can expect more of what we are experiencing."

Here's some background on what Walker is talking about:

Credo Mutwa is a Zulu witch doctor who claims he was abducted by aliens.

The Chitauri, whom Alice Walker referenced, are aliens that were the creation of Marvel Comics writers. They are a fictional race of extraterrestrial shapeshifters that appear in publications by Marvel Comics's alternative universe, Ultimate Marvel, in the limited series The Ultimates. They were created by Mark Millar and Bryan Hitch.

They also made an appearance in the recent blockbuster movie The Avengers as the space aliens who were the overlords of Thor's brother Loki.

So get this straight. Alice Walker, the author of The Color Purple, thinks that some fictional creatures invented by Marvel Comics are controlling the Earth.

Alice Walker is quite obviously, in the most charitable terms, delusional.

And if you take her seriously, about anything, you are a moron.

Marvel comics didn't invent this particular idea. It appears in Robert E. Howard's story, "The Shadow Kingdom," published in 1929. There's an allusion to this in the "Conan the Barbarian" movie from 1980.