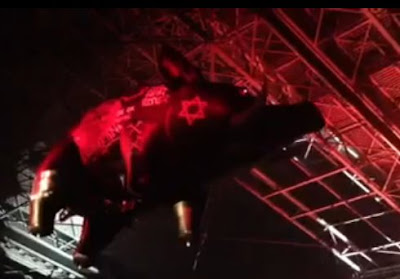 Some concert goers were left feeling uncomfortably numb at a Roger Waters performance in Belgium last week when a black balloon in the shape of a wild pig – bearing a Jewish Star of David as well as symbols of dictatorial regimes from around the world – floated above the audience.

“I came to the concert because I really like his music, without any connection to his political stance toward Israel,” Alon Onfus Asif, an Israeli living in Belgium, told YNetNews.com. “And I had a lot of fun, until I noticed the Star of David, on the inflatable pig. That was the only religious-national symbol which appeared among other symbols for fascism, dictatorships and oppression of people. Waters crossed the line and gave expression to an anti-Semitic message, beyond all his messages of anti-militancy.”

Waters recently sat on the so called Russell Tribunal on Palestine, a kangaroo court in which that shallow nitwit participated with a group of hand-picked clowns, including the mentally degenerating Alice Walker, who has repeatedly professed her insane belief that the world is controlled by space lizards. She recently disclosed the "race" of space lizards in question and it turns out they are a creation of Marvel Comics.

These are the types of hateful imbeciles that lead the current anti-Israel movement.

More at Elder of Ziyon