What if the German Army had overthrown Hitler in 1934?

The removal of duly elected Egyptian President Mohammed Morsi has placed western leaders in a moral and practical quandary. 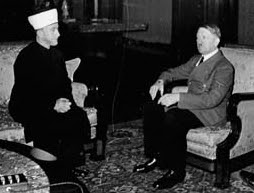 There are other components to democracy than free elections, but that is the foundation from which all other democratic freedoms spring. Morsi, an Islamist who was the candidate of the despicable Muslim Brotherhood was elected in an election that was deemed to be fair.

But there are other elements for a democracy to be democratic and Morsi has routinely stifled them. Free speech and religious freedoms for non-Muslims, aspects of freedom for which the Muslim Brotherhood has no regard, were trounced upon by Morsi's government.

Though bolstered by support from the foolish and ineffectual administration of US President Obama,  Morsi's slip into acting like a democratically elected dictator made him more popular in The White House than it did in Cairo. Massive nightly demonstrations that exceeded those at the end of the reign of Hosni Mubarak were proof of the popular discontent in Egypt.

So what is the appropriate reaction from the US and other western leaders?

Something to remember when considering that is that elections don't always lead to democracy. The other duly elected Muslim Brotherhood government, that of Hamas in Gaza, proves that once in power, Islamists, like fascists before them, will suspend democracy to retain their power for as long as they can hold on to it by force.

Though the so called "Arab Spring" in Egypt happened in the 21st Century, that country was less prepared for democracy than the American Colonies were more than two centuries earlier.

Institutions that are essential to democracy, like an educated population, a healthy system of rival political parties, a constitution that safeguards rights and an independent judiciary are all democratic facets America had in 1776.  The only political organization that was organized for Egypt's "Arab Spring" was the Muslim Brotherhood, which used mosques and madrassas to force-feed subservience to the faithful in a country that is more than 95% Muslim.  Rural Egyptians welcomed Morsi's tyranny of devout Islamism. That same Islamism was a bludgeon to the cosmopolitan citizens of Cairo who have spent the last weeks protesting en masse.

The embarrassing fall-out of the Egyptian coup is that after decades of the west acting superior and lecturing the Muslim world about democracy, the reality is that both they and we are better off if, in Egypt, it takes a time-out.

Morsi is a maniac who adheres to the murderous Muslim Brotherhood creed. Though we seem hypocrites to welcome his removal, what if the same had happened in Germany in 1934?

Adolf Hitler came to power the year before that in a fair election. The last fair election Germany was to have until after the Second World War and the millions of deaths the results of that election eventually caused.

Certainly there would have been an outcry from some quarters in the west if the German Army, seeing Hitler's insanity, had chosen to remove him the year after he was elected. But millions of innocent lives and untold devastation would have been averted if the Wehrmacht had taken such a bold step.

The difference is that we have the benefit of hindsight that the Germans in the 1930's did not.

There are those in the west who are sympathetic to Islamism and are decrying the Egyptian coup because they make the disingenuous claim it is undoing democracy. The fact is that while Egypt may have had an election, they did not have democracy.

The Egypt's military has shown itself in the past to be a mostly responsible steward of power. Hopefully they will use their time with it now to build those institutions needed for a true Egyptian democracy to emerge in the future.
Posted by Richard K at 5:08 PM