The Toronto Star's vendetta against Rob Ford has turned it into the Wyle E.Coyote of newspapers

The last two years have seen The Toronto Star become the Wyle E. Coyote of newspapers. Their editors and reporters have had all their outlandish attempts to dislodge Toronto's Mayor Rob Ford from office fail abysmally with their intended target emerging more secure after each disastrous effort. 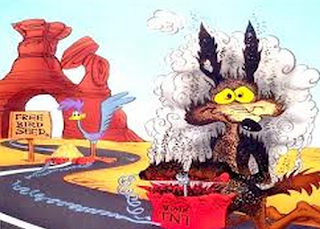 Even worse for The Star, like the cartoon character pathologically obsessed with hunting down the Road Runner, every one of their plans ends up blowing up in their faces, with the self-inflicted damage making them look increasingly ridiculous.

The Star's obsession with Ford and the discreditable approach they have taken to persecuting him has resulted in half of Toronto thinking the newspaper is flat-out lying in its reporting.

Contacts inside The Star's headquarters at One Yonge Street describe an environment where detestation of Ford is so open and pervasive that seasoned adults who should be planning their retirement have adopted all the dignity and intellectual vigor of Beavis and Butthead.

That is an actual conversation that was described to me as having occurred between two senior Toronto Star writers. And it reflects in their coverage of everything related to Rob Ford.

At first it was The Star's editorial writers who were infected worst by their deranged fixation on Ford. Articles by Rosie DiManno, whose writing indicated she was infuriated beyond coherence, and many from Heather Mallick, including one in which she envisioned a sordid, semi-date rape by Rob Ford, suggest mental illness on the part of some Star editorialists.

That disease has spread to its reporters as well. Yesterday, Doug Ford, the Etobicoke Counselor who is the mayor's brother, railed against Star reporter Robyn Doolittle, who went all the way to Florida to try to dredge up any material on Ford's family background she could find, including about Ford's elderly, widowed mother.

On Ford's radio show Sunday, a caller who manages the condominium where Ford's mother lives described an encounter with Dooloittle:


“She was interrogating me sort of for answers and I gave her truthful answers and finally the way she was talking to me, I said ‘Are you a reporter?’” he said. “And she says to me ‘Well I do work for a newspaper but this has nothing to do with the newspaper, this is a personal history that I’m compiling.’”

Never, since Confederation, has there been the type of invasive, personally motivated vindictiveness in the coverage of a Toronto mayor by a newspaper like the Toronto Star's treatment of Rob Ford.

Ford has never been accused of misusing public funds or corruption in office. He hasn't sold out the city to unions or special interests like his predecessor, whom The Star did its best to shield.

The campaign against Rob Ford is due to pompous elitists at The Star thinking their interests and their image is threatened by a plain-speaking populist.

And the irony of the matter is that The Toronto's Star's image is getting worse every day due to Ford. Not by what he is doing, but by how foolish and desperate The Star looks with each idiotic maneuver they try to pull to bring Ford down.
Posted by Richard K at 12:39 PM

Good analogy. I'm also reminded of that Wile E. Coyote drawing where he holds up a sign reading GENIUS. That's the Star's opinion of themselves.

Indeed - that's why it must have been inconceivable to them that the City would ignore their counsel and vote Ford into office.

All in a day's work. I'm not convinced.

You'd think the Toronto Red Star would've already jumped the shark after it was revealed the Torstar group prints and bundle's the English-language newspaper owned by the Chinese Communist Party on the order of 10 000 copies per day.

If a corporate body doesn't have a moral issue with providing assistance to be a mouth piece for the Communist Party, then you can guarantee they won't have an issue libeling Ford, or doing anything else, to get the end result they wish.

You believe Robyn to be “objective?” This I garner from your comment. Well, let us look at some of these responses in the Q & A you linked.

Q: A lot of people think you and the Star have it in for Ford.
A: We absolutely don’t. I went hard after Councillor Ana Bailão’s drunk-driving charges, the lobbyists’ registry and staff’s efforts to keep the crumbling Gardiner a secret. I cover city hall, not the mayor.

Well, I kinda remember picking up a disused copy of the Red Star and leafing through page after page after page of Rob Ford centric stories shortly after the Star’s manufactured Crackgate, and I call them stories, because they were mostly bereft of fact, and none of them were, as Robyn compliments, “He’s an unbelievable campaigner, and he phones people right back, which is empowering for voters. I think he’ll probably get re-elected. Anyone who discounts him is foolish.” That kinda talk will get you fired, in the ever shrinking staff of the dead tree medium which will inevitably be known historically as the defunct printed leftist oriented Toronto Star.

And so, how does a daily rag like the Star, which should be covering news from all over the nation and the planet end up not being taken to task for taking up almost its entire first section on hit pieces on Ford, rather than allotting it to the “City” section, ‘cause after all, TO ain’t the center of the Canadian Universe?

Willey Coyote indeed. And what is the real fallout, which has been going on even before the Ford vendetta, or in the Red Star’s case, any vendetta against common sense ideology associated with the right, which would be anything which disagrees with liberal leftist multicultural ideology slowly dragging our province and culture into a socialist bankrupt hellhole? Layoffs:

Let’s not forget Robyn’s credential origins from Ryerson, another well-known hotbed of liberal minded journalistic teachings. Re: John Miller, “What kind of journalism professor actively volunteers to join in the government’s censorship of a fellow journalist?”

And Finally, the best of all:

“You viewed the crack video in a car with the accomplice of a drug dealer late at night. Did you ever have second thoughts?
I did think, ‘If this goes bad, what’s my exit strategy?’”

Typical enshrined leftist socialist entitlement behaviour. As a journalist, the first obligation is to the truth. (http://www.journalism.org/resources/principles)

It seems, Robyn Doolittle’s first obligation was not to the truth, for had it been, she’d gone through the necessary hoops to acquire the facts instead of contributing to a sideshow freak show of innuendoes, something which used to belong to the likes of the Enquire yellow journalistic grocery checkout magazine stand standard, but which has quickly the standard for much of the media. A standard, as Richard has pointed out has gone beyond the Enquire standard to Loony Toons (which by giving the Toronto Red Star the ranking of “Wily E.”, as stupidly tenacious the TorStar’s writers are when it comes to political writ being passed off as objective) is actually a compliment. After all, he could’ve went with Foghorn Leghorn, I say!

But that could go either way given the lieberal upbringing of most folks these days, being that they wouldn’t understand the humour of such Toons of the time, seeing as they don’t understand the Toons of today, in the form of the Toronto Star – a cartoon in print without pictures…mostly.

At least there’s the ads.

I dont even trust The Tsar's sports scores, weather reports or reportage on weight of royal babies.

If rob ford gets hit by an acme anvil we will know who to blame.

The Star hates Rob Ford because the mayor makes consideration for taxpayers a high priority.

Look at you fools now!

Ford's approval rating has actually gone up because of the pile-on led by the Star and every serious political analyst says he should not be counted out from winning re-election.

So what was that about "you fools"?