Social media can be like juggling chainsaws. If you do it well, you can make quite a name for yourself, but do it badly and you can end up with a nasty, self-inflicted gash, or worse.

I'm amazed that politicians would use something as potentially self-damaging as the "this is the sentence I'm now thinking" service twitter for anything but the most mundane messages.  For an elected official who hopes to stay such, there's absolutely no upside to any other use for it.

People like former Senator Fred Thopmson have used it to showcase their very clever wit, but the operative word there is former and the the number of people who are as pithy as Thompson are few. 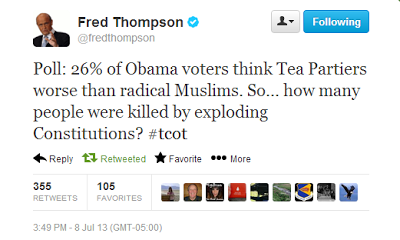 Which brings me to my member of Parliament, Liberal MP Carolyn Bennett.

The other night, thanks to a re-tweet from Carolyn, I learned  of a dire threat to newly selected Liberal Leader Justin Trudeau.

Described, by another twitter user as "someone on twitter encouraging others to assault Justin Trudeau" and with an attached photo of the offending tweet, I immediately checked it out.

I am no fan of Mr. Trudeau the younger. It is with pride that I note that a Google search for the term "Justin Trudeau is an idiot" produces one of my blog postings as the top result. But even more strongly, I believe that political violence is a reprehensible form of expression in a democratic society.

And it's completely unnecessary. We have so many other ways of expressing ourselves to tear them down, and as long as politicians follow the law and are subject to elections, political violence is completely unacceptable and should be condemned.

However it seems the "assault" being encouraged in this instance was not quite the savage menace implied by the message I saw.

It turned out that someone with the twitter handle Ottawa Angry Cat had posted a $500 bounty, insofar as a donation to the Humane Society in the name of a person counts as such,  to anyone who would shove a cream pie in the face of Liberal leader Justin Trudeau. 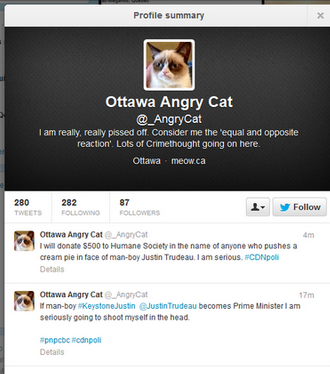 Don't get me wrong. Although I support the fine work the Humane Society does, shoving a pie in Le Dauphin's face is not OK, no more than it's OK for someone to throw a slushie at Toronto mayor Rob Ford.

But the thing is, that Ottawa Angry Cat's contract on Justin would probably not have been noticed had my MP not decided to disseminate it to her over 12,000 twitter followers.

Ottawa Angry Cat only had a few dozen followers, a number almost doubled following Carolyn's publicizing of his bounty. How anyone would actually ensure that someone only known as Ottawa Angry Cat made good on his promise is something that might be considered when assessing the seriousness of the threat, but that's not really the point, I suppose.

Now, thanks to the diligent efforts of a big, big fan of Justin Trudeau, it appears the RCMP have been notified and Ottawa Angry Cat has gone deep into hiding.

But the question remains, is it really such a smart thing for an MP to be advertising, in rather exaggerated terms, a bounty on her leader? 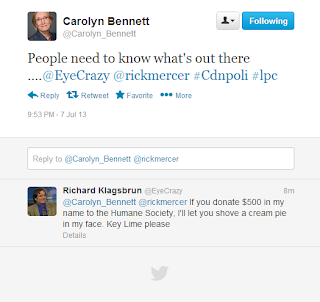 When I expressed my twitter surprise that my MP was doing so, Carolyn responded that "people needed to know what's out there." I was interested in learning about Ottawa Angry Cat's threat being there because I found it mildly amusing, but "need" would be something of an overstatement in this instance.

I like Carolyn Bennett. I think she's on the wrong side of some very serious issues, but she's a good person and she's not corrupt, and it's not every Liberal Party politician in Ontario at the federal or provincial level about whom you can say that.

However, social media isn't something she seems to get all that well. I've helped her with a twitter gaffe before, Still, Carolyn doesn't seem to have learned the crucial lesson that as a politician, social media is a tool that can do you as much harm as good.

I will kick in a hundred bucks to raise the bounty to 600. Bucks. I am serious. You have email address. When I see the idiot wiping cream pie off his hair, you contact me for a prompt cheque.

This Cat's just kidding - I certainly don't have your email! Now remember kids, you can get into a lot of trouble for pieing the leader of the 3rd party!

In my experience, most threats of violence are just hot air.