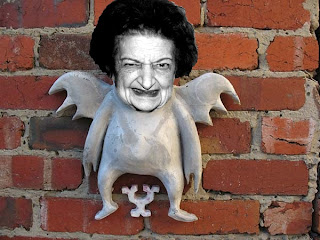 "Michelle and I were saddened to learn of the passing of Helen Thomas.  Helen was a true pioneer, opening doors and breaking down barriers for generations of women in journalism.  She covered every White House since President Kennedy’s, and during that time she never failed to keep presidents – myself included – on their toes.  What made Helen the “Dean of the White House Press Corps” was not just the length of her tenure, but her fierce belief that our democracy works best when we ask tough questions and hold our leaders to account.  Our thoughts are with Helen’s family, her friends, and the colleagues who respected her so deeply."


PLAYBOY: Let’s get to something else you said more recently. In a speech in Detroit last December, you told an Arab group, “We are owned by the propagandists against the Arabs. There’s no question about that. Congress, the White House and Hollywood, Wall Street, are owned by the Zionists. No question, in my opinion. They put their money where their mouth is. We’re being pushed into a wrong direction in every way.” Do you stand by that statement?

THOMAS: Yes, I do. I know it was horrendous, but I know it’s true. Tell me it’s not true and I’ll be happy to be contradicted. I’m just saying they’re using their power, and they have power in every direction.

PLAYBOY: That stereotype of Jewish control has been around for more than a century. Do you actually think there’s a secret Jewish conspiracy at work in this country?

THOMAS: Not a secret. It’s very open. What do you mean secret? ... [Jews have] power over the White House, power over Congress. ... Everybody is in the pocket of the Israeli lobbies, which are funded by wealthy supporters, including those from Hollywood. Same thing with the financial markets. There’s total control.

PLAYBOY: Who are you thinking about specifically? Who are the Jews with the most influence?

PLAYBOY: Then how do you make the claim that Jews are running the country?

THOMAS: I want you to look at the Congress that just came in.

PLAYBOY: In America you’re talking about a relatively small community. Jews make up roughly two percent of the U.S. population. On a worldwide level, the percentage is well under one percent. Those numbers don’t exactly spell domination.

THOMAS: I get where you’re leading with this. You know damn well the power they have. It isn’t the two percent. It’s real power when you own the White House, when you own these other places in terms of your political persuasion. Of course they have power. You don’t deny that. You’re Jewish, aren’t you?

THOMAS: That’s what I thought. Well, you know damn well they have power.

PLAYBOY: Were you surprised that people like David Duke and even Hezbollah came out and said you were courageous and a hero for them?


THOMAS: I don’t want to be a hero to anyone. I just want to be me, and I want to tell the truth. I want everyone to accept the truth.