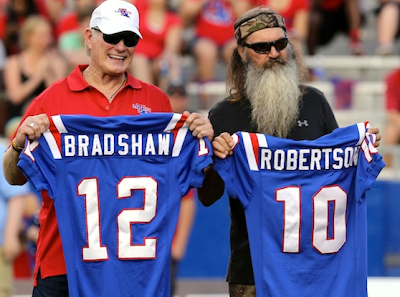 The might be most amazing thing about the A&E Duck Dynasty flip-flop is that the dimwits at the network that broadcast the show would think its audience would give a shit about outrage from GLAAD.

Or at least it would be for anyone who didn't know how astoundingly stupid most TV executives are. Duck Dynasty is reality show about a family or southern Christian rednecks who are upfront and proud of their beliefs and way of life. Following a GQ Magazine interview in which family patriarch Phil Robertson denounced homosexuality as sinful, which is a the traditional Christian outlook, the Gay Rights advocacy organization GLAAD pressured A&E into suspending the star of the network's most popular show.

While Robertson's comments were not going to cost the network any loss in viewership from its core audience, A&E shot itself in the foot with its overreaction by suspending him. Faced with an immediate backlash by Christian groups and fans of the show, A&E lost a quarter of the network's audience in the week following the suspension.

Faced with those numbers and a potential walk-out by the rest of the cast, A&E immediately capitulated and reinstated Robertson. A&E executives are now mumbling a bunch of stuff about dissociating themselves from Robertson's views, tolerance, and free speech, which is what they should have done in the first place without having suspended their top's show's star and rights owner.

The outcome of all this is that Robertson emerges in a stronger position, A&E executives come off looking like imbeciles, and GLAAD gets a kick in the teeth by having overplayed their hand, which will lead targets of their future campaigns to be less likely to be intimidated by the Gay Rights lobby group.

Joan Rivers and Hunger Games actress Jennifer Lawrence are continuing some sort of a feud.

In a public relations catastrophe, Big Box furniture store The Brick is weaseling out of a 50% discount it offered to online customers on Boxing Day, saying they made a mistake.