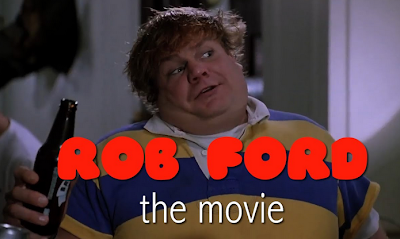 When I used to work in Hollywood for a production company that's films garnered a slew of major Oscar nominations, one of my jobs as a Creative Executive was to decide whether or not to recommend screenplays for production and to write notes on them.

With the news that The Toronto Star's City Hall reporter Daniel Dale is planning, with the enthusiastic support of his employer, to sue Toronto Mayor Rob Ford for libel in a lawsuit of dubious merit, an analogous thought occurred to me, particularly after reading this in The Torontoist:


Dale will continue covering municipal politics, he also explains. “With the full support of the Star, I will stay on the City Hall beat while pursuing this action… I can easily imagine the mayor and his brother attempting to turn the tables on the Star and calling for me to take a leave of absence…I will not let this affect my job. I will not be bullied off of my beat.

I thought of my reaction if I had received a screenplay in which part of the plot involved a City Hall reporter, for a newspaper with the largest circulation in a major city, suing a mayor for libel and continuing to cover the City Hall beat while pursuing the suit.

The ensuing conversation in that imaginary scenario would have gone something like this:


ME: The gags need to be punched up a bit, but on the whole it's a pretty good premise for a comedy.


WRITER: Comedy? This is a serious political drama.


ME: I love your sense of humor! It's great, we've got the John Goodman-type regular guy slob, and all the stuck-up elitists are out to get him, like King Ralph, but at City Hall. But seriously, we need some more gags with the reporter and the mayor encountering each other. Oh, and that flaky female reporter that made a name for herself by stalking the mayor, I think her motivation should be that she has this sexual fixation on him, like she's a chubby chaser or something. Here's a scene you might want to consider: maybe she could corner him in private and flash her beaver and demand he eat her out. She could say something like, "You look like you know how to eat a lot of pussy!" And he's squirming to get away and says,"I've got plenty to eat at home!"


WRITER: You don't understand! I mean it, this is a serious political drama about an oppressed reporter seeking justice from an evil politician!


WRITER: Yes! My sympathies are completely with the newspaper and its reporters.*


ME: Okay. You realize that changes everything. Here's why that's not going to work. First off, you've got who are the villains and who is the hero mixed up. You have this guy who was elected, and he's this silly doofus who tells ridiculous lies about his personal life, but when it comes to serving the public, is scrupulously honest. The guy even coaches underprivileged kids and takes them into his own home. And that's your villain.

On the other side, you have a newspaper run by hypocritical snobs who support a corrupt government that misappropriated billions of dollars in public funds. And they lie about this mayor character, they hate him mainly because he's not part of their "in" crowd, they obsessively stalk and harass him, and support every undemocratic effort they can think of to get him out of office.  And those are supposed to be your heroes??


WRITER: But this terrible mayor has made the city a laughingstock!


ME: That's pretty harmless, and again, it's what makes this all more of a comedy.


WRITER: But the real drama comes when this detestable mayor slanders one of the hero reporters by implying he's a pedophile, potentially destroying his life!!


ME: Yeah. Well, here's your problem with that. The way you describe it, in the first place, the Mayor never said he was a pedophile, he was talking more about his own state of mind when he heard that some guy was peeping in his back yard. In fact, this mayor character explicitly says he doesn't know if the reporter was taking pictures of his kids. He was talking about how a father feels when he hears someone might be invading his privacy and talking pictures of his young kids. That doesn't sound like slander to me and there's no threat to the reporter's reputation because quite reasonably, nobody takes seriously the possibility that the reporter could actually be a pedophile.


WRITER: No! Wait, you're wrong about something! I never had the reporter peeping in the back yard!


ME: Alright, then here's where you've got some more problems with your storyline. After a neighbor calls him, the mayor comes charging out to confront the reporter, who freaks out and runs away.


WRITER: That's right, the Mayor is a bully!


ME: Okay, so let's assume your reporter never peeps in the mayor's back yard. How does the mayor know he's there? Why would a neighbor call the mayor to tell him someone is walking around on public land? The only way your story makes sense is if, even if he wasn't taking pictures of it,  he was at least peeping in the mayor's back yard. I still think you should give some thought to the comedy angle. Maybe have the reporter be a bit like Jim Carrey's character in The Cable Guy...


WRITER: No! It's not a comedy and no, the reporter was never standing on cinder blocks and peeking in the mayor's back yard!!


WRITER: That's right! I think every decent, social justice-seeking person in the audience is going to identify with the crusading newspaper and its heroic journalists!


ME: Interesting. The way I read it, in your story, the only people you've got siding with your newspaper are pompous douchebags and sanctimonious nitwits. But aside from that, we get to the most blatant problem with your story...


ME: Well, while this reporter is suing the mayor, he still is doing City Hall coverage for the newspaper.


ME: So? So that's completely implausible. There's no way a real newspaper could ever allow that to happen. It would undermine any shred of credibility even as biased a newspaper that you've written about could even pretend to have. I mean, how could there even be a pretense of objectivity and fair journalism when you allow a guy who is suing the mayor to be writing City Hall coverage!? It's like committing seppuku as far as all credibility goes. There's no way an audience would believe that even a third-rate rag of a newspaper would do that.


* Actually, this is the point where I would have thought I was dealing with a lunatic and would have edged the meeting to a quick conclusion.

"There's no way a real newspaper could ever allow that to happen."
Out of personal curiosity, which media paragon are you referring to?

I wouldn't have believed any serious news organization would have allowed a situation like that to annihilate its credibility.

I suppose I should have realized that "The Toronto Star" and "credibility" have become a contradiction in terms.