Pound back a few beers and get drunk, then have a few people executed...It's good to be Kim Jong-un! 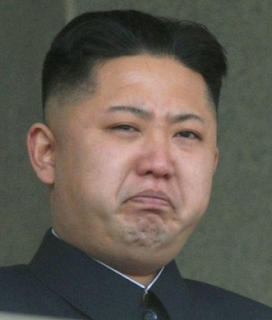 This should please the communist morons who comprise the so-called Canadian Peace Alliance, which wants the west to appease North Korea even more:

The North Korean leader Kim Jong-un was "very drunk" when he ordered the recent execution of two aides close to his uncle Jang Song-thaek, reports say.According to the Japanese newspaper YomiuriShimbun, the pair questioned an order from the dictator to hand over control of a business to the military. Sources told the newspaper Kim was "upset" when they said they needed to check with "Director Jang" first.The leader's uncle, who was removed from power and killed as part of a recent high-profile purge, was head of the ruling Workers' Party administrative department.

egads, i usually am intrigued by your take on thingz, as you are a solid-canadian(tm), but referencing a 7-year-old treatise could be considered a bit gratuitous, maybe? .... although the grammar and style is a bit "not according to hoyle", as it were, the narrative is not so much one of appeasement, as it is a hoped-for focus on the "nature red tooth and claw" output of what a strident response would entail .. methinx?

That "treatise" was the most direct one that could be accessed as an Internet link, Chris. I'm probably a bit more familiar with the organization than you realize. Their position hasn't changed at all.

The organization has a bizarre leadership with some of its top people being Trotskyite, most are communist and/or members of the International Socialists, which is headquartered in the same small centre in the Annex, and at least one is an Islamist with direct links to terror groups.

The head of the organization, Sid Lacombe, is a fool who regularly makes speeches at al Quds Days rallies, where they proudly fly Hezbollah flags and call for Jihad as well as invoke racist terminology against Barack Obama.

The resolution below will be introduced at their 2014 gathering of clowns:

CPA2014-09 North Korea
Whereas each year NATO holds joint military nuclear exercises as a direct provocation and threat on
the Korean peninsula against the North Korean people,
Whereas the U.S. - along with Canada - has attacked and tried to destroy Korea in the 1950's in what
they call “The Forgotten War”, and has, over the years, armed South Korea with nuclear weapons,
Whereas the U.S. uses even satellite launches by North Korea to provoke hostility towards it, using
basically the same accusations about “dictators”, nuclear threat and the such, which it is presently using
in Syria and Iran,
Whereas North Korea has a program of peaceful reunification with the South,
Whereas it is the U.S. at the head of NATO who is the real threat to peace on the Korean peninsula,
Be it adopted resolved [RC] that we will support the Korean people who are doing nothing but defend
their sovereignty, and we give a clear warning to the U.S., NATO, and the Canadian government :
Hands off Korea! Diplomacy with North Korea, not aggression!