HER is an unusual, but pleasant surprise 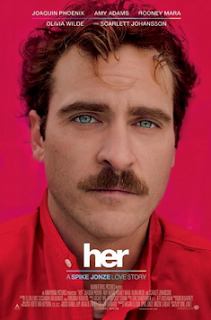 I was at an advance screening of HER last night and I suppose it shouldn't be too much of a surprise that the latest film from director Spike Jonze is offbeat, intelligent and a solid film.He's the same person responsible for two of the most clever, thought-provoking romance movies in the last 15 years with Being John Malkovitch and Adaptation from Charlie Kaufman's brilliant screenplay (and which was produced by my friend Ed Saxon).

Taking a new twist on romance, HER is set in the near future, anticipating the exponential influence that technology has in our lives and some of its potential effects.

As we become more computer-reliant, Jonze anticipates we'll all look more and more like computer nerds. Taking things further, in a moving and understated performance by Joaquin Phoenix, his character Theodore falls in love with the latest operating system for his home computer.

The OS, which calls itself Samantha, is a disembodied voice whose artificial intelligence becomes more real and compassionate than any of the humans in Theodore's life. Samantha is voiced by Scarlett Johansson, who, though we never see her, gives one of the best performances of her career,

Evidently she was brought in later in the post-production to redo the voice role which was originally done by Emily Mortimer, who plays a producer on the sanctimonious HBO series The Newsroom.

Bloomberg Businessweek has a good review of HER that tells you more, which you can read at THIS LINK.
Posted by Richard K at 8:56 AM

Email ThisBlogThis!Share to TwitterShare to FacebookShare to Pinterest
Labels: movies