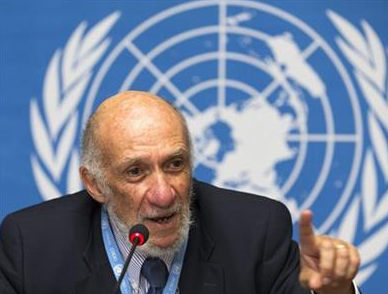 The latest outburst from the demented rapporteur representing the ironically-named United Nations Human Rights Council has brought about another call for his dismissal from Canada's Foreign Minister, John Baird:


December 17, 2013 - Foreign Affairs Minister John Baird today issued the following statement:
“Canada completely rejects and condemns the appalling remarks made by Richard Falk, United Nations Special Rapporteur for the Palestinian territories, in which he accused Israel of ‘genocidal’ intentions.
“Canada has previously called for Falk to be fired for his numerous outrageous and anti-Semitic statements, and these comments underscore once more the complete and total absurdity of his service as a UN Special Rapporteur.
“I call on the United Nations Human Rights Council—once again—to remove Falk from his position immediately.
“Not only do these comments undermine the fundamental values of the United Nations, they also belittle the terrible genocides that have tragically taken place throughout history and around the world.”
- 30 -
Posted by Richard K at 12:42 PM