The only downside to last night's Munk Debate at Roy Thomson Hall in Toronto had nothing to do with the  arguments that were made but with the ones that were not.

The debate resolution was that the world cannot tolerate an Iran with nuclear weapons capability and to say the dialogue was pointed and compelling would be almost redundant. From their inception, the Munk Debates have featured some of the world's most informed, articulate and experienced experts in the varied subjects presented. That list includes luminaries such as Henry Kissinger, John Bolton, Stephen Lewis, Niall Ferguson, Christopher Hitchens and Tony Blair to name a few.

Last night was no exception in that regard. The sold-out audience of 3000 included former and present political leaders, renowned writers, business magnates, distinguished academics and some of Canada's most notable personages (and I managed to sneak in too). The pair taking the pro position were the Washington Post's brilliant columnist Charles Krauthammer and Israeli Major General (ret.)  Amos Yaldin opposing CNN's worldly,  articulate commentator Fareed Zakaaria and John Hopkins University' School of Advanced International Studies Dean, Vali Nasr.

Krauthammer began charming the audience by recounting that he used to be a practicing psychiatrist, but switching careers to political analyst, the difference is that  people he now analyzes have access to nuclear weapons.

The respective positions were quite straightforward. Krauthammer and Yaldin essentially positing that Iran is ruled by irrational, messianic terrorists who have threatened to wipe out Israel and cannot be relied upon to not use nukes in a first strike scenario should they acquire them. They also noted that the Non-Proliferation Treaty would be worthless in the region since Iran, Turkey and other Gulf states are terrified of the threat that Shiite Iran poses to their Sunni nations, and they too would acquire nukes to balance against the Mullahs' power.

Yaldin is indeed the very model of a modern major general. He is a military hero who was one of the pilots who completed the successful bombing raid deep into enemy territory that destroyed Saddam Hussein's nuclear reactor at Osirik in 1981 and now is a national security adviser.

Zakaria and Nasr proposed that Iran, despite being abhorrent, is not ruled by suicidals. They added that the Iranian threat was analogous to the Cold War between the US and Soviet Union, in that the nuclear deterrent was able to prevent a war and was a situation that everyone was able to live with.

To that latter point Krauthammer astutely countered that anyone who was an adult in America during the Cuban Missile Crisis, as he had been, would not be so cavalier about the world coming to a brink of being within hours of a nuclear war. 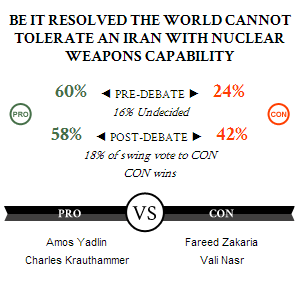 The cons ended up winning the debate, gaining 2% of the people who had voted the other way prior to the exchange and the big majority of the undecideds (read uninformed). Their victory came less on the merits of their arguments than beguilement by the skillful allure of Fareed Zakaria's oratory abilities. He pulled off a similar victory in the last Munk Debate I attended when, teamed with Henry Kissinger against Niall Ferguson and David Daokiu Lee, Zakaria made an appealing, emotional 'mom and apple pie' speech that America would not fall behind China as an economic power in the coming century.

Following the debate, I was having a glass of pinot grigio in the foyer while talking to a very lovely brunette when Charles Krauthammer rolled by in his electric wheelchair. I spoke with him for a bit and mentioned a significant point that when glaringly unmentioned. Zakaria had argued that America made the right right choice in not launching a preemptive war against the Soviet Union in 1945 when they were working on acquiring their nuclear arsenal.

My point was, right for whom? It most certainly wasn't right for the millions of people exterminated by Josef Stalin nor the tens of millions sentenced to a living death in the Soviet gulags. Neither was it right for the hundreds of millions of eastern Europeans whose liberty, human rights and well-being were crushed under the yolk of Soviet oppression for over forty years. It wasn't right for the Hungarians in 1956 nor the Czechoslovakians in 1968 when Russian tanks rolled into their cities to annihilate their attempt to usher in freedom. All those evils could have been avoided if America had confronted a non-nuclear Soviet Union when it had the chance. Moreover, we may be consigning tens of millions more to a worse fate if Iran gains hegemony in the Middle East.

Krauthammer, a warm, engaging man, graciously agreed they were important points. I didn't bore him with other flaws I heard in the positions of Zakaria and Nasr, such as my belief that they were being foolhardy and shortsighted to say the Iraq war was a failure. While I think it could have been avoided, democracies may eventually take hold in the Muslim middle east, despite the horrible direction the so-called Arab Spring is taking. Should that happen, then undoubtedly the removal of Saddam Hussein and the establishment of a democracy in Iraq will have been a catalyst for that change.

However the debate was only about an hour and a half and one can only make so many points in a little time. In that time, with Rudyard Griffiths doing his usual, exemplary job of moderating, the debate was a thoroughly enjoyable, stimulating conflict of ideas.

As an addendum, a poll commissioned by the Munk Debates was released yesterday that contrasted with the results from the Munk Debate audience.  By a huge majority - 92% - North Americans agreed with the proposition that the world cannot tolerate Iran with nuclear weapons.

Public debates and polls may be irrelevant to the matter at this point. Security sources I have spoken to in Washington and Canada have said that US President Obama is very serious about his commitment to make sure that Iran does not gain nukes. If it gets to the point where Iran comes close to being able to assemble one, then military action from America is almost certain to follow.