A meeting room at swanky, newly-built towering Shangri-La Hotel in downtown Toronto held about a hundred expensively-tailored middle aged men, a handful of poised,elegant women and a few oddball stragglers (like me)  for the inaugural night of the Byron Talks speakers series. The Byron in question not being the late English poet and adventurer but a Canadian capital markets firm.

The unusual assembly of notable speakers who came together last week were Conrad Black, Mark Steyn, John Crosbie and Nigel Farage  for what was billed as a discussion about Canada's Place in the World. For many in the audience, it turned out to be a very surprising evening.

I was fortunate to have been invited through a business associate of Mark Steyn's, but the presence of a plebeian like me at a soiree for the upper crust usually raises a few eyebrows. Canadian media innovator Moses Znaimer, who clearly forgotten having been introduced to me at a business meeting a while back, looked like he was contemplating whether to call security to have me ejected when I said a brief hello to him. You know you're among the haut monde when the closest thing to the "common man" was the National Post's erudite Managing Editor Jonathan Kay.

Sun TV's stunning Faith Goldy was standing around in a colorful, wildly patterned dress that was a vision of what you'd see if you walked into a florist while peaking on LSD. She explained she was wearing it because she came from work. I assumed work was being an extra in a time-travel segment of a new Austin Powers movie, but it was unimportant as Faith was beautiful enough to carry it off.

All of the evenings featured speakers milled about in the bar area before the talk. United Kingdom Independence Party (UKIP) leader Nigel Farage and I had a jovial chat at the bar while waiting for an overwhelmed bartender to take our orders. He is as witty and affable in private as his public persona suggests, and expressed tremendous optimism about his party's chance to do better in the next British elections than current governing coalition partner, the Liberal Democrats.

To many, if not most, at the gathering who came to hear media stars Black and Steyn, Farage was unknown, but there is a considered sense that will change soon. But first to the other speakers.

Currently promoting his memoirs (and getting into public arguments in the process), the venue and the subject matter was an ideal reminder that Conrad Black is a remarkably eloquent and brilliant, if somewhat garrulous speaker. Acting as host from the dais, his remarks were salient reminders of the state of current affairs and as a thoughtful and serious historian, he provided critical context. Despite his recent difficulties in the United States, he observed that not only is it the most important country in the world, but it is the beneficiary, through its own virtues, of two unprecedented historical features. Those being the only peaceful transition of dominant power from one empire to another (British-to-American following World War 2) and that America's rise was the fastest ever, having taken place over the course of what amounts to just three lifetimes.

Black also had cogent and non-partisan praise for Canadian governance, saying that over the last dozen years, through both Liberal and Conservative administrations, Canada has been the best governed nation in the world.

At 81, former federal Progressive Conservative Finance Minister and current Lieutenant Governor of Newfoundland John Crosbie has lost none of his humour and wit. About Black's profundities, he quipped, "Conrad's had three and a half years to think about what he's going to say." Most of Crosbie's talk recounted  amusing anecdotes from his many years in politics, such as the time a feminist researcher asked for a list of federal judges broken down by sex. Crosbie's reply was that he didn't know how many judges had been broken down by sex, but he did know some who had drinking problems. He also spent quite a bit of time telling Newfie jokes to the gathering, my favorite of which is the following:


A Newfie who just moved to Toronto are driving down the Don Valley Parkway with their empty U-Haul they just unloaded. A guy at the side of the road waves them down and the Newfie pulls over next to his broken down truck. The guy tells him, "My truck conked out and I have a truckload of penguins I have to get to the zoo, but now with the time I lost I won't be able to see my girlfriend tonight. You look like honest; I'l give you five hundred dollars if you take the penguins to the zoo for me." The Newfie  agreed, loaded the dozen penguins into the U-Haul and drove off with them.

That night the truck driver is out with his girlfriend walking down Yonge Street when he sees the Newfie herding the dozen penguins down the street ahead of him. He runs up to them and shouts, "what's going on!? You said you were going to take these penguins to the zoo for me! I gave you five hundred bucks !"

The Newfie responded, "I know. I took 'em to the zoo and I had three hundred bucks left over, so now I'm takin'  'em to the movies."

Popular author and radio host Mark Steyn spoke about subjects he addresses frequently, America's decline and the potentially devastating consequences of the astronomical national debt.  With his usual wit and command of terrifying data, Steyn delivered a message that would make the most optimistic believer in western democracy shrink in gloom.  He railed against an American government that is "looting the future to pay for the present" and  "can spend everything and do nothing." He exprssed outrage that while spending 41% of the entire world's military budget, America has a Commander-in Chief unwilling to use it when it's needed, like the terrorist attack on the US Mission in Bengazi.

One of the absurd ironies that Steyn pointed out is that the while the United States pays enough in interest on its debt to them to finance the entire Chinese armed forces, America's government continues to donate foreign aid to China, to improve their factories. All this while American jobs continue to be lost to those American subsidized factories in The People's Republic.

Steyn's famous humour and perspective, Black's gravitas and knowledge, and Crosbie's wisdom and insight into government were the reasons just about everyone attended the Byron Talk. Virtually no one there had heard of Nigel Farage. He was the last speaker and as someone who has seen him (on video) perform in the European parliament, it was a pleasure to see the other people discover Britain's most exciting, witty, acerbic, and forthright politician since Winston Churchill.

He had Black wiping away tears of laughter when recounting his hilarious conflicts with European Council President Herman Van Rompuy, whom Farage refers to as "Rumpy-pumpy." The danger of the current European Union structure is that it is undermining democracy. Indeed, leaders of the European Parliament has been livid in their condemnation of those countries who dared to hold elections to validate (or refute) their adherence to Euro-policies. Farage recounted how former European Council President Martin Schulz had said, on the possibility of Ireland's rejection of a European fiscal treaty that "we will not bow to populism." When Europe`s leaders define populism is the democratic will of a nation and they stand ready to oppose it, Farage`s fears are certainly justified. Particularly so when, as he noted, current British Prime Minister Cameron showed his willingness to defy populism by reneging on his promise to hold a similar referendum in England.

Farage`s excited, eloquent speech was punctuated with hilarious personal observations, such as that `the achievement gap opened up between Germany and France was made worse by the election of a total idiot as France`s President` and that Germany`s Chancellor `Angela Merkel in private is even more miserable than Angela Merkel looks in public.`

One of the solutions to the current crisis faced by western nations that Farage offered is that the Commonwealth countries, India, Canada, Australia, and so on, put a concerted effort to re-engage with each other but under a different name and structure than the old Commonwealth.

There was a lot to digest that night in the way of ideas and what was said portends of times ahead that if not managed properly, could lead to a decline from the greatest heights of human achievement. And if anyone says that decline is impossible, they should consider that the Romans at the height of their empire said the same thing. 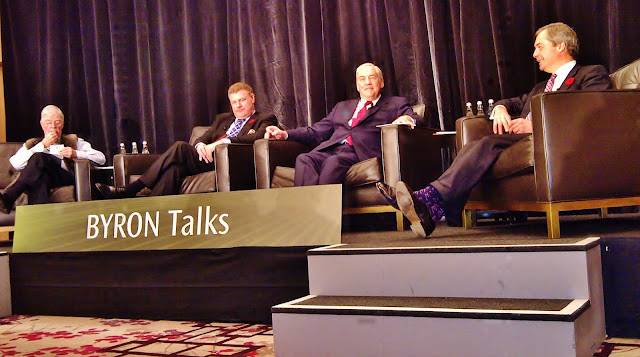 Wow. You couldn't put together a finer list of conservative raconteurs short of raising Sir John A from the grave.

Indeed! - a wonderful evening and very civilized - we were able to bring our drinks from the bar into the room, which made some of John Crosbie`s very funny jokes even funnier.