What would normally be a quiet Sunday evening in a central downtown section of Toronto a five minute walk from Lake Ontario was unsettled by a mob of dingy, hostile would-be revolutionaries. A smattering of about two hundred and fifty professional protesters comprising local anti-capitalist, Trotskyite, anti-Israel  and New Democratic Party-linked Marxist groups converged on Toronto's downtown Royal York Hotel to protest against Immigration Minister Jason Kenney.

The occasion was an irresistible opportunity of expressing hostility towards two of their most hated objects, the Conservative government and the Jewish state, as Kenney was being honored by Israel's Haifa University.

According to a leaflet they distributed, the loud, unhappy throng was there "in outrage." There was nothing illuminating in that disclosure, since outrage, anger and resentment are the only emotions such miserable, envious malcontents ever seem to channel.

The mainstream media, either through laziness, their own disdain for Harper's Tories, or sheer ignorance of the issues they are covering (which is common for Canadian journalists) whitewashed the event as a group of citizen protesters.


In fact, many if not most of the protesters were non-citizens, like Marxists Syed Hassan and Sakura Saunders, attached to the lunatic extremist organization No One is Illegal, which wants to do away with all immigration regulations, while providing full tax-funded benefits for anyone who steps foot on Canadian soil. They and the other groups and individuals at the protest were anything but a cross-section of typical Canadians. They represented extremists including members of the Black Bloc, anarchists, radical Trotskyites, pro-regime Iranians, Mohawk Warriors, pro-terrorist Palestinian advocacy groups, Omar Khadr supporters, the violent anti-capitalist group Ontario Coalition Against Poverty (OCAP) and an array of others.


Blogger Laura Rosen Cohen has catalogued the vast cornucopia of organizations involved in the disturbance, which would be impressive were it not for the fact that the radical fanatics involved  keep creating three or four new groups for every new cause they approach, with almost all of them having cross memberships. Indeed there were almost as many protest groups "endorsing" the gathering as there were actual protesters.

Some of the chants at the protest the consensus media did not report included  "one, two, three, four, this is class war!" " the only solution is revolution,"  and "F**k the police!" The latter was all the more ironic and preposterous as the police were ensuring the safety of the bedraggled grousers from traffic while protecting their right to democratic dissent as the protesters were insulting the  "agents of state oppression."

The cacophony from the usual suspect groups with their hodgepodge of idiotic grievances had its expected effect; no clear message was conveyed other than their hatred for Stephen Harper and Jason Kenney. 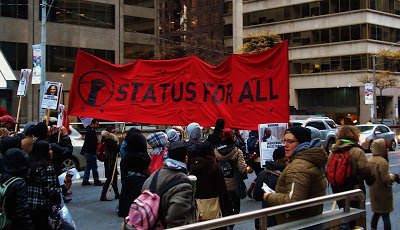 The one unfamiliar addition to the assembly was a group of Romas, who were shunted to the rear of the protest by the organizers.  They were there to express anger at Kenney's refusal to view Hungary as an oppressive country from which Roma need refuge. I spoke with one who was carrying a bizarre sign that said "Our ashes are mingled" and showed Nazi concentration camp ovens used to cremate murdered inmates. The point, the fellow told me, was that Jews and Gypsies suffered together from racism in Europe and they should be standing together in solidarity here in Canada.

I inquired about the Roma groups attendance at the rally, since I had heard they had dissociated themselves from it, as it was filed with anti-Semitic groups. His response suggested the Roma group had been duped by the organizers of the protest. He had said they were planing to stay away because they were pro-Israel and did not want to be interpreted as anything else, until the Roma were convinced by the organizers that Jewish groups were attending. It was inconceivable to the Roma man I spoke with that Jews could be anti-Israel. While I understand his perspective, it could also be inconceivable that some Jews would have collaborated with the Nazis.   Yet some did, just as groups like the so-called Independent Jewish Voices and the Monty Pythonesque-sounding United Jewish People`s Order collaborate now with groups that support the murderers of Jews.


I met up with Greg Renouf, who operates the blog GenuineWitty at the demonstration. He has expended innumerable hours investigating and exposing the radicals involved in the socialist far-left in Canada. He has found links between the radical fanatics in the Black Bloc and No One is Illegal that ties not only to unions like Canadian Union of Public Employees (CUPE), but to the highest echelons of the federal New Democratic Party.

Renouf feels that their behaviour resembles that of cult members, who lacking in intelligence and analytical skills are left only with the ability to mindlessly chant slogans.

He observed that the fools we were watching were incapable of accomplishing anything of substance. He is right, but it appeared to me such events aren't actually meant to accomplish anything other than to give the leaders of such gatherings an excuse to exercise their leadership and maintain the personality cults they have established for themselves.

More worrisome was the involvement of pro-regime Iranians, who evidently are attempting to make inroads with the native community and prepare terrorist action in the event of a war with Iran.

While the misfits and cretins that comprised the protesters outside the Royal York are unlikely to ever affect change through discourse, events in the recent past have proven that it only takes a handful of such miscreants to make a devastating impact through terrorism and for that, Canadian need to remain vigilant.


The other side of the leaflet distributed at the protest: 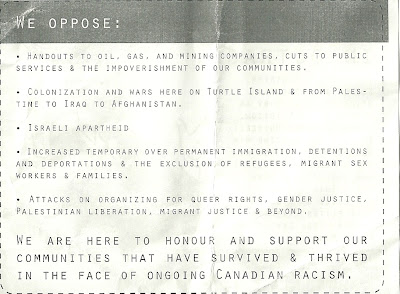 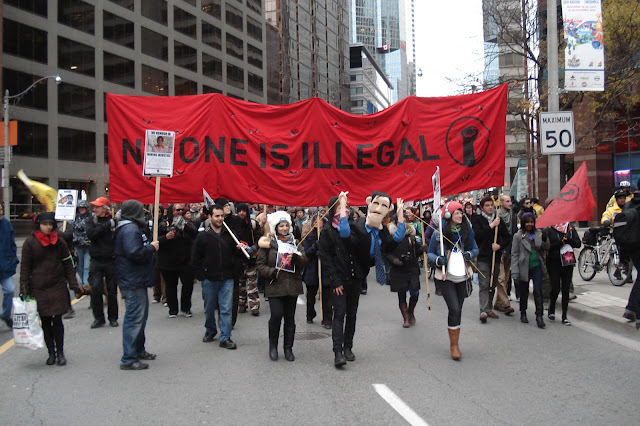 A handful of protesters infiltrated the Royal York by disguising themselves as normal human beings.

More soft-soaping by the MSM: 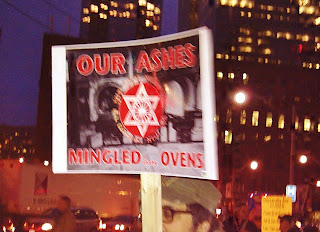 I notice a real lack of brown faces in that crowd. Mostly Whitey postal workers and Mennonite-looking university dorks in black tights. Was this just a day out for the Moronto NDPee?