The meaning of the striking, controversial, crystal-like structure jutting over Toronto's Bloor Street that is part of the renovated Royal Ontario Museum has been the subject of much speculation since it was built a few years ago. Yesterday I heard an explanation for its shape I hadn't heard before. Designed by architect Daniel Libeskind,  it appears the edifice was built to serve the International Jewish Conspiracy. 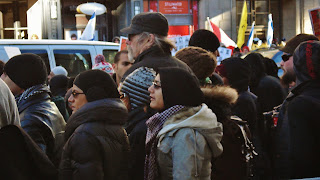 The Hamas supporters' demonstration was rather tame and anti-climactic.Their turnout was disappointing - almost 1300 clicktavists had committed to attend the demonstration on its facebook page, but less than a fifth of that number showed up to vent their fury. It was planned while the recent Israel-Gaza conflagration was still occurring, but since then a cease-fire has come into effect. Nonetheless, war or peace is irrelevant to the core of hateful fanatics for whom a Jewish state is an affront and its destruction is catechism.

Many of the usual suspects obsessed with eliminating the only genuine democracy in the middle east were there. Ali Mallah, the buffoonish Islamist CUPE representative, the shrill, frumpy Sociology professor Mary Jo Nadeau and Sid Lacombe,  the grubby puppet of Iranian interests who acts as fuhrer of the misleadingly-named Canadian Peace Alliance, were in the forefront.

There were a few surprises as well. One of the featured speakers was a young woman who made a disgraceful name for herself earlier this month by disrupting Toronto's Remembrance Day services and insulting the memory of Canada's fallen soldiers. Ranting about Canada being a "white supremacist society,"  this woman was obviously too stupid to comprehend the irony of her complaining about not having free speech in Canada while screaming slanderous insults about this country into a microphone at one of the busiest intersections in the nation's most populous city. That she was honored by the vapid pro-Hamas group was hardly surprising.

A significant visual distinction between the pro and anti-Israel demonstrators that revealed much of who they are could be seen in the complete absence of Canadian flags among the Hamas supporters. The pro-Israel group held Canadian and Israeli flags together.  Among the Muslim and radical leftists across the street were Palestinian, Syrian, and Turkish flags and signs proclaiming their hate, but not a single Red Maple Leaf.

The reason for that is something they made clear; because the Hamas supporters despise Canada. Referring to our country as an "occupied, racist, colonialist-settler state," among other expressions of detest, their invective towards Canada was only slightly less vitriolic than their venom directed towards Israel.

Along those lines was the bloviating from Union Boss Sid Ryan of the Ontario Federation of Labour. If ever there was a personification of the need for Bill C-377, which calls for transparency in union spending, Ryan is it. Doing what he does best, which is being a self-aggrandizing blowhard, Ryan bragged about how he pushed through a 'boycott Israel' resolution while heading the Ontario branch of the Canadian Union of Public Employees.  In his tenure at CUPE, Ryan's pompous foolishness did nothing but prove how ineffective his resolution was, have scorn heaped on the union, and offend the majority of public workers and others for whom Israel's destruction is the furthest thing from their minds. Claiming the "occupation" has been going on since 1947, before it even became an independent state, Ryan revealed the end of  Israel's very existence is the goal he is striving to abuse his union role to further.

On the occasions I attend these types of protests, it is to observe and chronicle them. There was something about this instance that was different. This time, in the heart of Toronto, just a few blocks from the neighbourhood where I grew up, standing next to Canadian Forces veterans like Mark Vandermaas,  remembering some of the brave Canadian WW2 vets whom I knew as a child,  and hearing Canada and Canada's proud history being maligned by hateful acolytes of a new form of fascism, I decided to participate.

I took a Canadian flag and waved it high in the wind opposite the symbols of evil wielded by the ignominious votaries of a Death Cult. Waving our nation's flag amid a group ranging from little old ladies, former Peacekeepers, university students, average citizens and even a few of the extreme Zionists of the Jewish Defense League there to show their disdain for terrorists felt good, but I wanted to do a little more.

While Coalition Against Israeli Apartheid denizen Mary Jo Nadeau may be a low-tier academic with an unimpressive intellect, there is indeed one thing she does moderately well - screaming mindless slogans during demonstrations. Before she, Mallah and the rest of the anti-Israel mob skulked away along Bloor Street,  I decided to try an experiment. The Hamas supporters have a simple, facile narrative: "we are oppressed, we are victims, they are oppressors" and that was the essence of the tripe Nadeau was screaming, but she wasn't doing a very good job of electrifying her side.

On the north side, one of the Israel supporters had been continually talking into a rival loudspeaker, reciting support for Israel and opposition to terror. He was doing a decent job of counterbalancing the din from the Hamasphiles on the south, but neither that nor Nadeau's best efforts left either side impassioned by what they heard. So I thought I'd help the bad guys get more excited about their cause.

Union Commissar Ryan bewailed Canada not "saying a word" about Israel's "disproportionate" retaliation against Hamas. So borrowing the microphone from the pro-Israel speaker, I started with: "On that side of the street, they complain that the Canadian government hasn't condemned Israel. That's because Canada supports democracy and liberty over terrorism and tyranny!"  That got their notice and I continued.

Remembering that a few minutes earlier, a subdued and tired-looking Tim McCaskell from the small, lunatic fringe group of anti-capitalist Gays called "Queers Against Israeli Apartheid" had addressed the Hamas supporters, I closed with an acknowledgement of his group's self-defeating stupidity. "On that side, they support Hamas, which oppresses women, which denies free speech to Gaza and murders people for being Gay. On this side we support equal rights and human rights for everyone!"

The experiment worked. While I delivered that brief address, the Hamas-lovers were jumping up and down, shouting profanities and threats, with pained expressions of rage like rats in a Skinner Box.

I handed the microphone back to the gentleman who was speaking before me, who then continued with his recitation. Though a great deal briefer and far less eloquent than the speech delivered earlier in the week by Foreign Affairs Minister John Baird, I'd made some of the same points and had done what I wanted.

One incident that was recounted to me by an elderly woman after the demonstrations dispersed is worth mentioning. There was a young woman, a university student, holding a sign among the Hamasites that read, "I was born in Israel and I condemn Israeli Apartheid." The elderly woman asked her, "how is it that Israel is an apartheid country?" Evidently not really understanding the meaning of the word, the student replied, "Israel took land away from the Palestinians."

"But what does that have to do with apartheid?" the older woman countered. "The same land was taken away from the Jews too and was never a 'Palestinian state.' In fact Zionists were able to buy up much of the land when it was controlled by the Ottoman Empire."

To that, the younger woman said, "what's the Ottoman Empire?"

What's the Ottoman Empire? That in a nutshell describes a vast amount about the anti-Israel fanatics who gather periodically on Canadian streets. Too witless to think beyond the puerile slogans they hear and too incurious to inquire beyond the indoctrination of biased, politicized liberal arts courses, they parade like stupid lemmings to the precipice of a loathsome ideology they don't even comprehend.


Syd Ryan and his conspiracy theories:


Pat Condell has the situation summed up:

Blogwrath has some great photos too


More fun from the Death Cult: