Rob Ford was not the target in Project Traveller.

He wasn’t even a target.

The Toronto mayor is a footnote to this investigation from a police perspective.

Toronto Police launched the project about a year ago. The controversy involving Ford came much later.

What they heard was people they were targeting talk about Ford.

While the city remains transfixed on the possibility police have recovered the video allegedly showing Ford smoking crack — which Ford has denied doing — Project Traveller started like any other for the Gun and Gang Task Force.

It had nothing to do with Ford, but with combating drugs, guns and violence


It looks like if Ford's enemies want to bring him down, they're going to have to find even crazier women to throw even bigger slushies at him.

Update: Toronto's "hated" mayor being swarmed by fans in the middle of hipster downtown Little Italy
(h/t The Hammer): 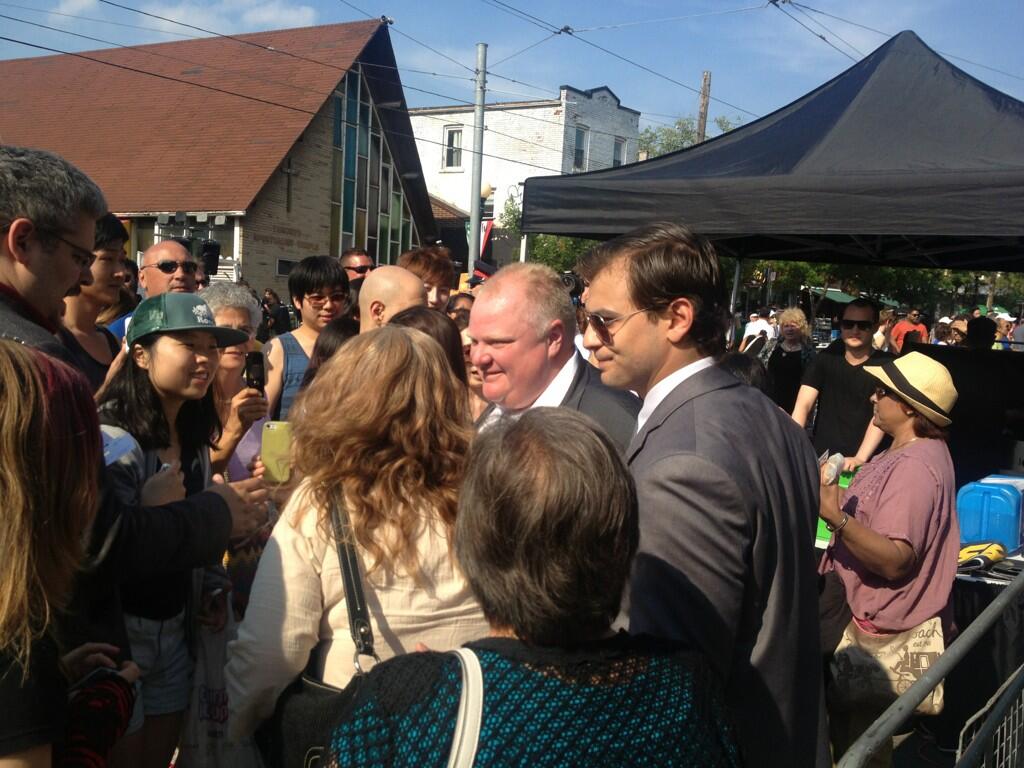 Wow, that news report was a little biased. According to a guy, Rob Ford was well loved by the crowd. But one idiot makes the news:

Ford has been unable to move down the street for the past 5 min or so, so many ppl want a picture with him #topoli
Retweeted by Ezra Levant
Expand

"It looks like if Ford's enemies want to bring him down, they're going to have to find even crazier women to throw even bigger slushies at him."

They already have Sarah Thomson, you can't get much crazier than that!

Wow, an entire artil based on anonymous sources!

I thought this was the sort of thing you've been condemning of late...

I'm condemning executing (metaphorically) someone based on anonymous sources.

Ford really put a bug up your ass, eh, Skippy?

No, I'm just being consistent. I've never bitched about anonymous statements, whereas you consistently do, but only when they conflict with The Narrative.

By the way, which is worse, anonymous leaks from a staff that is largely concerned about the mayor's health, or illegal anonymous police leaks about an ongoing police investigation?

Again, I sort of hope Etobicoke Slim stays in office. He's legislatively impotent now and he amuses me endlessly. He's a lot like Kwame Kilpatrick without the love of strange poontang.

Seriously, Skippy, I read your blog (which I enjoy thoroughly), and who do you think you're kidding about your hard on for Robbie?

There's a big difference between reporting based on anonymous leaks, which, given the serious allegations about Ford and the lack of actual evidence was somewhat irresponsible on the part of the Toronto Star, and then to make the completely irresponsible leap, as al Starzeera has done, to call for his resignation based on those unproven reports from anonymous sources.

I'm glad to hear you want him around, because to paraphrase Mark Twain, rumors of Ford's demise have been greatly exaggerated, so like it or not, he's probably going to be mayor for a while.