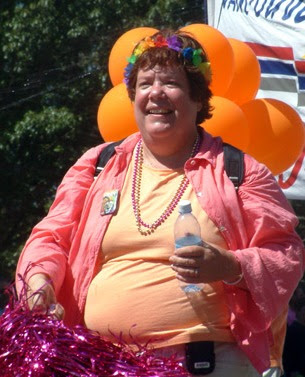 Once again, the NDP travel to the US to promote left wing extremism. Over the weekend, Deputy NDP Leader Libby Davies participated in Left Forum 2013 in New York – a conference committed to addressing the “destructive nature of capitalism’s inherent drive to growth”.
The conference featured anti-capitalist, anti-Israel, anti-responsible resource development seminars, including among many others,
Canadians should not be surprised by this latest demonstration of left wing extremism from the NDP. After all, Deputy Leader Libby Davies believes that the terrorist attacks of 9/11 are “irrefutably false”, and NDP Leader Thomas Mulcair doubts that Osama Bin Laden is dead.
More HERE
Posted by Richard K at 8:00 AM

And doesn't her spouse run the union backed radical Rabble.ca?

At least she keeps the fabric industry in business.

I just saw that this "Left Forum" took place at Pace University. Which is a private university in Manhattan. Private universities are very expensive and thus become filled with the children of the upper class.

Ironic they would hold a "Left Forum" at a school which is a symbol of upper class elitism. The main campus is literally right next to the financial district in NYC.

It's not at all surprising. Marxism is almost exclusively confined to university campuses and educational institutions where many have lived in an unrealistic bubble their whole lives.

And still, it's almost always the worst academics along with students in lower tier programs like Sociology or Gender Studies. I guess the thought of how they would function in the real world, without Big Brother or Marxist envy dictating what to do, is too terrifying for them to handle any other way.