UPDATE: The link to The Toronto Star article at the bottom of this post came up on my Google news feed today, but is actually about 7 months old.

Fortunately a helpful lunatic on twitter let me know of the error:


However there is an article in today's Toronto Star that is not explicitly hostile to Ford and even presents him in a positive light. Though The Star being The Star, they can't resist opinionated digs,  but the article does show how Ford goes out and serves the constituents of the city. That is something very rare for The Star, so indeed the tide may be turning after all. 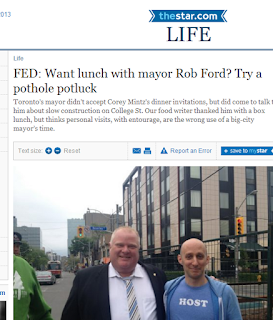 Perhaps it's because they were sensitive to the many criticisms of their bias and their pursuing a vendetta against Toronto's Mayor, Rob Ford.

Perhaps it's because of their many efforts to bring him down, the last one, involving am alleged video of Ford smoking cocaine has backfired.

The Toronto Star violated all standards of journalistic decency and ethics in a desperate shot at scooping a US-based gossip website.and unseating Ford.  The video, from unnamed and highly disreputable sources, not only failed to materialize but also did not affect Ford's support. Worse than that for The Star, their histrionic reaction discredited them to the extent that half of Toronto believes the newspaper has no credibility.

And perhaps they finally realized that Rob Ford is going to be mayor of Toronto for some time, whether The Toronto Star likes it or not.

Whatever the reason, they have suddenly and startlingly taken to publishing articles that actually treat Ford fairly, presenting him in the positive light he has worked hard to earn. 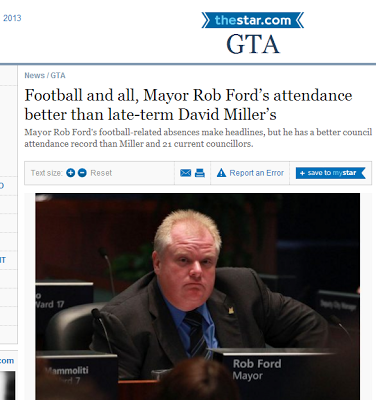