Pride Toronto had maintained the lie that they included the hate group Queers Against Israeli Apartheid, not because they were interested in promoting anti-Semitic message of the fanatical activists, but because they did not want to 'censor' the Pride Festival.

Toronto Sun reporter Sue Ann Levy has long maintained that Pride Toronto`s supposed neutrality when it came to Queers Against Israeli Apartheid was a sham. Now, with the commitment from Toronto City Council to deliver almost $150,000 in cash plus provide far more in services like Police support to the annual event, the veneer has fallen and Pride Toronto has shown its overt support for the anti-Israel group, promoting its most recent event on the official Pride website.

This comes as no surprise. Last month, after delivering a deputation to Toronto's Executive Committee about  the inappropriateness of providing tax funds to Pride if it is a platform for a hate group, I overheard something interesting outside the Committee Room.

The heads of Pride Toronto and the representatives of Queers Against Israeli Apartheid were discussing and coordinating strategy between them.

However, Pride Toronto`s involvement with Queers Against Israeli Apartheid should be of serious concern, and not just because it is an affront to every taxpayer in Toronto who is subsidizing the festival.

Pride Toronto has chosen to promote a group whose senior members have shown support for countries and individuals that promote the persecution and even murder of Gays because of nothing other than their sexuality.

Queers Against Israeli Apartheid`s spokespeople have supported and held banners at Toronto`s al Quds Day rally, which along with its goal of eliminating Israel is also a show of solidarity with the Islamic Republic of Iran, where the persecution and execution of homosexuals is entrenched policy.  The rally is largely driven by one of Iran`s chief acolytes in Canada, the notorious Islamist hatemonger Zafar Bangash.

Bangash has called for Muslims to dominate what is now Israel and impose Sharia Law there. Given his outspoken devotion to the Khomeinist leadership of Iran, it is safe to assume that the version of Sharia Bangash wants for Israel would be the same as Iran, which he describes as representing  `the true values of Islam today. They make us proud of Islam!` 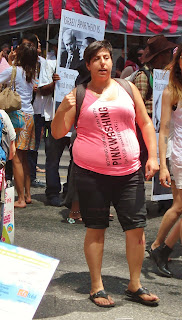 Israel is the only country in the middle east to recognize Gay marriage and have laws protecting Gay Rights. The values of the nation admired by the man who holds rallies that Pride Toronto-promoted Queer`s Against Israeli Apartheid`s leaders attend in support include hanging Gay men from cranes as punishment for their `sins.`

Pride Toronto nor even the vapid hatemongers of Queers Against Israeli Apartheid are likely to condone the persecution of Gays.

But in the case of Queers Against Israeli Apartheid,  they are a group comprised of fanatics who are devoted to an anti-capitalist, anti-western ideology and they are willing to make common cause with virtually anyone they see as allies.

Their interest is not Gay rights, but taking down America, and America's allies, of which they consider Israel to be particularly vulnerable, and therefore a ripe target.

Making the fatuous argument that Israel, where Palestinians enjoy more civil rights than in virtually any Muslim country, is an apartheid state, is transparent bigotry as well as absurd propaganda. But Queers Against Israeli Apartheid, as the preposterous name of the group suggests, are not comprised of particularly intelligent individuals. Many of them have obvious psychological problems. They make the absurd, narcissistic claim that Israel's support for Gay rights is not based on respect for Human Rights but is what they call "pinkwashing". From the appearance of the ratty group of unkempt clowns in Queers Against Israeli Apartheid, "pink" isn't the only type of washing they oppose. These HamasSexuals might better describe themselves as Queers Against Personal Hygiene.

At last month's Toronto Executive Committee meeting, a Gay physician, Dr. Paul Druzin, said he does not want his "Gay tax dollars" to fund Pride if it includes a hate group like Queers Against Israeli Apartheid.

The fact that Pride Toronto supports such a group is an insult not just to Gays in Toronto like Dr. Druzin, but to anyone who is concerned about the persecution of Gays throughout the world. This obscene cooperation between the so-called Queers Against Israeli Apartheid and Pride Toronto not only discredits Pride's leadership, but calls the suitability of Toronto to host the World Pride Festival next year into question.

UPDATE: Blogwrath was there, enduring the whole tedium. You see the videos he put up of the entire lecture HERE
Posted by Richard K at 2:01 PM

The reason the right-wing corporate/military owned government in Israel gets away with murder is because everyone is so scared of being called an anti-Semite. I’m not anti-Semite; I’m anti-murder.

What an absolutely idiotic statement, Nadine.

You obviously have no clue about the situation about which you commented and evidently lack the intellect to fathom anything in the post where you chose to leave it.

A Gay Pride festival promoting those, like you, who are happy to associate with people who advocate for a regime that murders Gays isn't the kind of murder you care about.

This may be more than your very limited ability to comprehend may be able to take in, but self-defense is not murder. As opposed to the intentional killing of children by suicide bombers from the people you support.

This is more than the time you're worth, Nadine. Based on some of the twitter messages, like the one below, that you've sent me, the type of issues you have are something about which you should consider therapy.

Nadine Lumley Real
‏@NadineLumley
.@EyeCrazy do you have bros and sisters? That more sex assault for your poor mommy

I think we should start a campaign to send QuAIA to anti-Israel events in countries like Iran, Lebanon and Egypt.

They should consider it just for the job prospects. Other than those sucking off the the public teat through school boards and the like, I don't see how any of those idiots are employable in Canada, since they would discredit any employer who hired them.

Of course in those Islamic states, as Gay people their careers would literally be short-lived, given the particular affection for homosexuals in Sharia law.

- well, that sums up the mentality of the QuAIA brigade: It's ok for Palestinians to kill and dehumanise gay people because other people are being mean to them. It must be a real luxury to have a permanent excuse for being a sh*tbag.

Having a permanent excuse for being a shitbag is something QuAIA members no doubt admire as well as require.