Mitch Wolfe: Rob Ford Is Getting His Groove Back 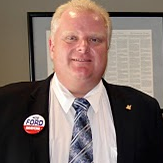 This has been a good week for Rob Ford's campaign for re-election as Toronto's mayor in 2014.

I can just see and hear those from the old media -- the Star, the Globe, the Post and the Sun -- spitting up their gluten-free almond milk all over their granola, down at their local Whole Foods store.

The consensus among the Toronto literati, intelligentsia, and Richard Florida's creative class, (who all apparently live within the Annex or cycling distance to the Annex) is that Ford has made Toronto into an international laughingstock.

...Ironically, a very well-respected CBC reporter Neil Macdonald, has come indirectly to Rob Ford's defence. He wrote in an article:

"But embarrassed? Us? As in 'Oh. My. God. He's turning us into a LAUGHINGSTOCK?'  Spare me.The only Canadians I know who actually think that are the Torontonians who never shut up about how cosmopolitan their city is."

TO doesn't realize how much the rest of the province would happily live without them.