"St. Clair Fiasco" Joe Mihevc and other sleazeball responses to the Ford situation

The sleaziness and hypocrisy would be astounding if it weren't so predicable.

The one from Mihevc, the bumbler whose vastly overpriced St. Clair Streetcar fiasco is still used as an example throughout Ontario of how not do to a civics project, is particularly cretinous. As he has before, while professing sympathy and concern for Rob Ford, Mihevc takes every opportunity to insult the mayor while putting on the proverbial hairshirt of " pain for our City and the shame and embarrassment that Mayor Ford has brought upon us." 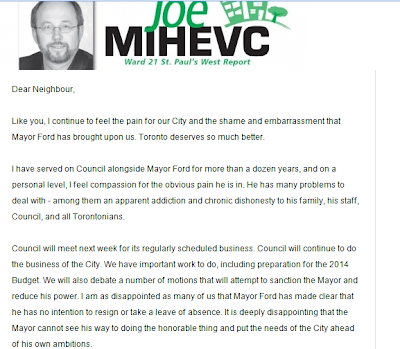 No sane person who isn't Rob Ford or an immediate family member of the embattled mayor is walking around feeling shame or embarrassment for anything Rob Ford has done. Only one of the notoriously asinine Toronto leftists whose personal self-esteem is tied to municipal politics would be stupid enough to profess anything like that. But that doesn't mean that sleazy municipal politicians can't sink so low as to try to milk as much advantage as they can from another person's personal tragedy.

The tone of these releases from the likes of Mihevic and Matlow is that character matters. Indeed it does. In their current statements, the hypocrites Mihevc and Matlow are demonstrating how their own character is far more reprehensible than Rob Ford's.

When City Councillor Ana Bailao was charged with (and later plead guilty) to drunk driving, Rob Ford didn't call for her head, but said "everybody makes mistakes" and offered her support.

Ironically, now with the tables turned Bailao, who is a convicted criminal, is calling for Rob Ford, who is not, to step down.

Clearly Ana Bailao is not the sort of person you want standing behind you if you don't want to find a knife in your back.

It's also worth mentioning that Matlow himself is somewhat dodgy about his own history of impaired driving.

There are a pack of braying hyenas on Toronto's City Council. While Ford has done a good job of pushing his agenda through and righting the course of the economic disaster upon which David Miller had set Toronto, some on Council think Ford's current perceived vulnerability is a chance to advance their own ambitions or those of their special interest friends.Those would include the union CUPE, which is still resentful about the last agreement that Ford managed to force them to accept and which has a number of Ford's more outspoken opponents in its pocket.

The public will have a choice a year from now. They can choose a flawed but devoted public servant trying to do his best for Toronto's citizens. Or they can choose one of the detestable hypocrites who aren't even trying to hide their glee that Ford's personal issues are hurting him.

When that choice is made, it won't be a choice to decide who is running their personal life best. It's a choice about whom the citizens of Toronto trust most to take care of the public interest. And with politicians like "St. Clair fiasco" Joe, whose ineptness wasted tens of millions of tax dollars leading the charge against Ford, that choice will be an easy one.

Joe Mihevc is not a bumbler.

When he was promoting the St. Clair streecar project, he claimed the "$45 million" project was so important because of the "union jobs it would create."

Of course it cost more than double that, cost lots of businesses a lot of business and drove other community businesses into bankruptcy.

So you can't send it back with "Fuck You" written in big black letters?

Thoroughly tempting, Rick, but in its own way, I hope this blog post says the same thing.

And for that anonymous comment, thanks - I stand corrected; those are good points.

This mihevc and a few others are jerks. I am ashamed to have this guy representing the city. All these guys do is raise non issues and create a hinderance in council meetings. All the meetings are about bs not pushing the business of the city forward. Also this clown talks about media and distractions but he talks to reporters everyday...he must not be that busy