The real "shame and embarrassment" of being a Torontonian

Olivia Chow, a Member of Parliament for a downtown Toronto riding and a presumed candidate for the position of mayor in the city's next election, spoke recently of the "embarrassment" that Rob Ford had brought upon her by his antics. "We are being embarrassed" she professed at a recent media scrum. This is the same Olivia Chow who is the widow of Jack Layton, who led the New Democratic Party from 2003 until his death, and about whom it was revealed that during their marriage he was caught by police in a dingy Chinatown brothel after receiving a hand-job (at the least) from a hooker.

I don't recall Ms Chow professing her embarrassment about that, just as she did not proclaim her "shame" about being exposed for taking advantage of subsidized housing while she and her husband were making a combined six-figure salary.

But because of the current Toronto mayor's occasional drug use and his intemperate remarks, now, finally, Olivia Chow has come to learn what it is to be humiliated.

Toronto Ward 21 Councillor "Fiasco" Joe Mihevc sent out an email to his constituents a couple of weeks ago in which he bemoaned "the shame and embarrassment Mayor Ford has brought upon us."

The very same Mihevic whose advocacy for, and bumbling oversight of an unnecessary dedicated streetcar lane along St. Clair Avenue in Toronto became the exemplar of how not to do a civics project. Disruption from the lengthy construction, which went more than twice the planned time at almost three times the cost to taxpayers, caused some local businesses to go bust. The resulting lane divided the neighborhood, created a nightmare of traffic congestion, made a number of intersections death-traps for pedestrians, and resulted in only a minimal reduction in travel time for public transit patrons.

I haven't been able to locate any expression of "shame and embarrassment" for his role in causing that fiasco. Last time I checked, Mihevc was still praising himself in the face of his incompetence.

But now, because of Rob Ford, a man for whom Mihevc has frequently and very publicly expressed his detestation, suddenly, a grotesque, enormous blot of shame has enshrouded "Fiasco" Joe.

A couple of days ago, I had a long conversation with an old friend in Los Angeles who is a film producer who has worked with people such as Steven Spielberg and Michael Mann. He asked me about Toronto and rather than shame, there was quite a bit of laughter in recounting the recent goings-on in my city's municipal politics.

One thing that did seem to surprise him was the increase in support for Ford since his confirmation of having smoked crack cocaine. It's easy to understand how someone not familiar with Toronto politics would find that unusual, and to explain that, I had to describe the Rob Ford phenomenon.

Despite the obvious problematic components, Rob Ford, at least in his role as a public servant and politician, is completely forthright, which places him in stark contrast with his opponents. He may tell stupid lies about his personal behavior, but when he says he wants to do something in the political arena, you know he means it and isn't saying it just for public consumption as is so often the case with his rivals. Ford may me prone to bizarre outbursts, but he is genuinely passionate about his concern for the average citizen.

After years of the city's being run by a wasteful nanny-statist, Ford was in large measure a reaction to the paternalism and deceit coming from our city's "mainstream" politicians.

Conrad Black put it well earlier in the week in an editorial for the National Post when he wrote that the people who support Ford "are not scandalized by obesity, occasional cocaine use, occasional drunkenness, or the odd whirl at the wheel of a car when a breathalyzer, if applied, could be problematical. They are, however, scandalized by rank hypocrisy from mouthy journalists and gimcrack municipal politicians, and by the confected and inflated sanctimony of prigs and twits."

Ford`s supporters are frequently portrayed by some of the stupider pundits and political prognosticators as only being concerned with keeping taxes down. If that were the case, then that fails to explain why Ford`s support held firm despite the need for a tax increase to help pay for a much-needed subway expansion in Scarborough. What those ideological enemies of Ford fail to grasp is that the mayor`s support is not based from people who hate taxes, but those who hate seeing taxes used wastefully, as they are so often by Toronto politicians who want to double as social engineers.

Last week, in what some have described as a palace coup, Toronto`s City Council stripped Ford of most of his mayoral authority, even though the excuse was little more than that they dislike and claim to be embarrassed by him. Ford has neither been charged with nor convicted of a crime while in office.

Then, as if on cue, only a couple of days later, the idiots on City Council started talking about imposing a property tax increase well above the limit Ford would have ever proposed. The backlash was swift and immediate. Ford`s opponents fell right into his hands, playing to his strength as a champion of taxpayers and his narrative that the rebellion was motivated entirely by ideology.

Ford is now rising even more in the polls, with him being favored more than any other candidate to be best qualified to manage Toronto`s budget.

Explaining Ford`s rise in popularity to my LA friend, I said, given the pathetic alternatives we have among municipal politicians here, the idea of a guy who takes the occasional puff of crack and goes on weird drunken tirades is still a lot more attractive than anyone else we have on offer.

"Wow," he replied, "things must be really bad there."

It was then that I felt a tinge of embarrassment. "Yeah," I said back, "they are." 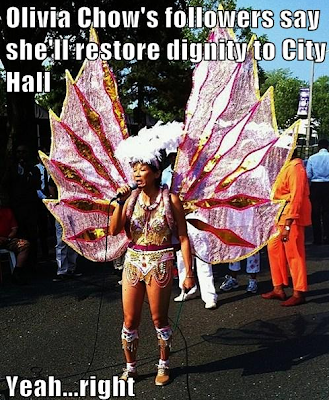 You have taken the St. Clair streetcar right-of-way out of context.

When Joe Mihevc was publicly promoting it he said that the $48 million program would create a lot of great union jobs and it did!

So what is an extra $60 million or so? That is only petty cash.

And now with the new streetcars we have started receiving Mayor David Miller, Joe Mihevc, Adam Giabrone, et al agreed to without a long-term financing plan for the $700 million or so in streetcars, so what if they are incompatible with the existing streetcar pedestrian platforms? What's a few tens of millions for remaking every street-level streetcar platform throughout Toronto? That will create a lot more great union jobs! We need more jobs!

David Miller when he was the mayor stated that Toronto property taxes were 30% lower than most comparable municipalities and that to reach typical taxation levels, taxes on single family homes would have to be raised up to 40% to reach those levels.

Don't you want to be a world class city like Washington DC, Detroit or Chicago?

Good points. I think we should all be paying more as our dimwit local politicians bankrupt Toronto so they can claim they represent a "world class city"

Toronto being the only such (alleged) one that has a class of people who are so pathologically insecure that they need to repeat that phrase over and over, but that just adds to our world classiness, eh?

What could make us more World Class than having an artist as our mayor?

Olivia Chow could be our very own Yoki Ono! That will make us really World class!

Yes, I would like to get shot in Washington DC and Chicago or chased by wild dogs in "world class" Detroit.

Cut Olivia some slack that picture speaks a thousand words.
The champagne-socialist can't get any more traction by playing the harpsichord for St.Jack, so Olivia struts her stuff to entice the love-Lorne into the libertines web of deception !
An embarrassment the limousine-socialist get-off on !!!

This "world class city" thing reminds me of a guy who is really insecure about his penis size and has to keep bragging in public about how huge he is.

Except most insecure men don't do that, even.

So Toronto is worse than that (imaginary) guy. That's pretty sad.

I was born in Toronto and it was a very nice city to live in before Art Eggleton and Paul Godfrey inflicted their pathetic case of New York-envy on the municipality.

Things have gone downhill ever since.

This is an excellent and persuasive article. Very well done.

There is a 23-year-old Toronto Star story about Jack Layton and Olivia Chow's living arrangement you might find interesting here
http://www.causepimps.ca/FMTA/about%20FMTA%20and%20housing%20coops.html