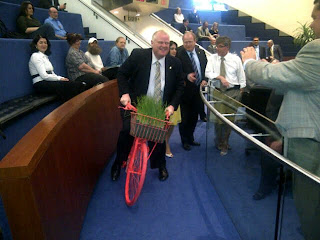 The recent Forum Research poll, taken after Toronto Police Chief Bill Blair disclosed the existence of a video in which Toronto Mayor Rob Ford puffs on a glass pipe, shows some pretty good approval ratings for the embattled civic leader.

Particularly noteworthy is that Ford's highest approval rating, 55%, comes from Scarborough, for which Ford successfully managed to get funding for subway expansion from Kathleen Wynne's heel-dragging Provincial government.

Ford opponents in politics and government have been insisting how unnecessary the Scarborough subway is and how the eastern borough would be so much better served by what would have been a fully-funded Light Rail Transit system. Much of that attitude is illustrated by The Toronto Star's Urban Affairs columnist Christopher Hume, when he bravely, and obviously painfully, ventured out of his elitist downtown enclave to Scarborough recently to assess the surroundings and reiterate his preformed conclusion about Scarborough's transit needs.

Here's the funny thing, though. Why is it that the people who actually live in and know the Scarborough area best are the ones most supportive of Rob Ford?

Therein lies a clue to much of Ford's success, and why the media and his obsessive detractors have such little success is swaying support away from him.

It's because Ford actually listens to his constituents and tries to give them what they ask for, rather than condescendingly and paternalistically deciding what is best for them, whether they want it or not.

Weird, isn't it, that the public will loyally support a politician who listens to and seems to care about them, even though their intellectual betters and moral superiors in the media and politics tell them they shouldn't?

Oh, do we get to start waving around Forum polls now? Good.

" Almost 60% of Toronto residents want embattled Mayor Rob Ford to resign but his approval rating has yet to crack, according to a new poll.

A Forum Research poll obtained by the Sun early Tuesday found 59% of those surveyed Monday night want Ford - who is trying to cling to power amid an ongoing crack video scandal - to quit. More than half of those surveyed also aren't satisfied with the various apologies Ford has delivered via his Sunday radio show, think the mayor of Canada's largest city has a substance abuse problem and believe he should take a leave of absence to deal with that problem.

But the same poll also finds Ford's job approval rating remains around 43% - virtually the same level it was when a poll was conducted last Thursday, the same day Toronto Police Chief Bill Blair revealed investigators now possess the video that shows the mayor smoking what appears to be crack cocaine. Around 57% of those surveyed disapprove of the job Ford is doing."

That could leave a mark.

I'm still betting on Ford against the field in '14