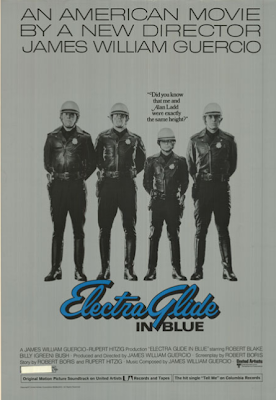 You're in for a fantastic treat if you haven't seen this movie before.

Electra Glide in Blue is one of the best films to come out of the 1970's. A largely misunderstood movie that was derided by some who totally misunderstood it for "glorifying fascism." The movie deals with the themes of being an outsider, loneliness and the disconnect between between people.

The plot revolves around a highway motorcycle cop, played by Robert Blake, who is convinced that an apparent suicide is a murder.

It was directed by James William Guercio, who was a producer for the band, Chicago, and as you would expect, the movie has a fabulous score.

This film was a cult sensation for years, but lately has fallen into near-obscurity.