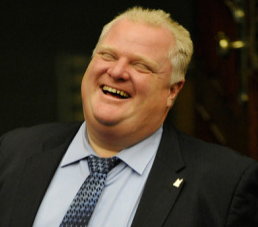 The popularity of Toronto’s top politico has risen slightly following the announcement that a video that allegedly shows him smoking crack cocaine exists, according to a new poll.

This is the best laugh I've had this week!

What was that about The Toronto Star being the Wyle E. Coyote of newspapers?

2) The fact that they pulled this poll out less than 48 hours after Blair's press conference makes want to look at the guts of the sampling and margin of error.

Even if the numbers went for Ford, I'd question anything that came out before Tuesday at the earliest, especially since the story broke on Thursday, when most adults were doing Halloween with their kids.

3) Does the polling take into account that the Sun - Ford's only media base - has abandoned ship and alled for him resign?

4) The question at this point isn't job approval, it's re-election. And I would posit that those numbers would be significantly different, especially in head-to-heads with Chow, Stinz and Tory.

As I'm sure you're aware, Ford has yet to better Chow in a head-to-head, and he's consistently only drawn about even with Tory.

5) Even if Ford somehow manages to hilariously win - which I think is still entirely possible - he's finished as a power. He won't have any coat tails, so council will routinely ignore him and no one at the provincial or federal levels will take his calls.

Oh, and that shithead Doug's dreams of higher office are done. Even someone as weapons-grade dumb as Tim Hudak will never have their picture taken with someone named Ford in the near future.

Win or lose, the brothers Ford are now political ipecac.

Hudak has no love for Ford, Doug in particular, but fortunes have been known to change quickly in this game.

Hudak stand every chance of losing the next election even though a hamster should be able to beat someone heading a government as corrupt and inept at Kathleen Wynne's.

If Tim loses the next one, he'll be a backbencher at best for the rest of his political career.

I'm shocked that Hudak hasn't had "Born to Lose" tattooed on his fucking forehead already. His rampant incompetence will elect either a Wynne or Horwath minority. I haven't decided yet, but Hudak's chances of winning are about the same as mine are, and I'm not running.